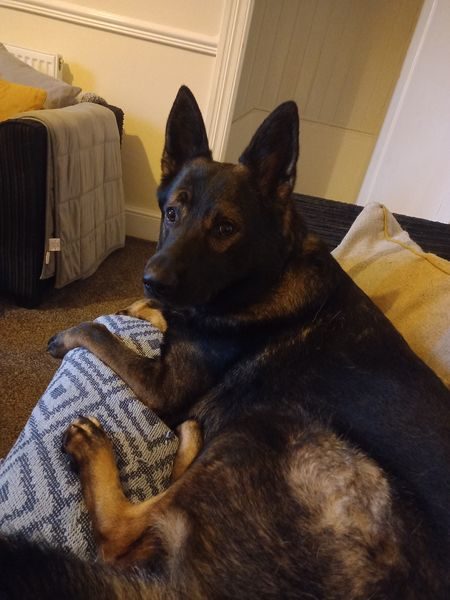 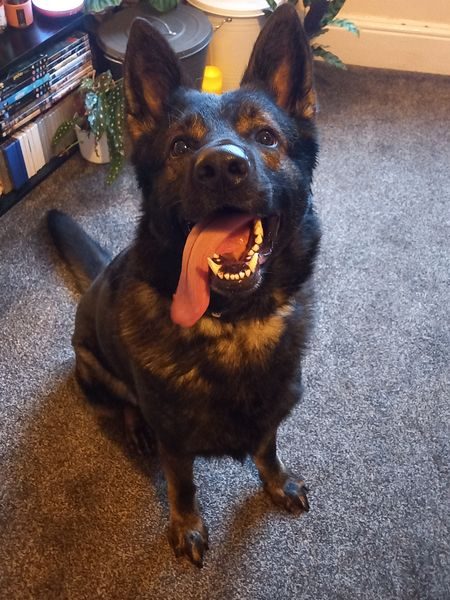 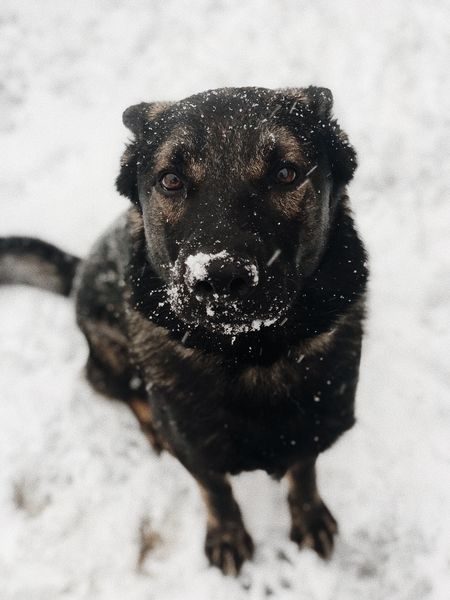 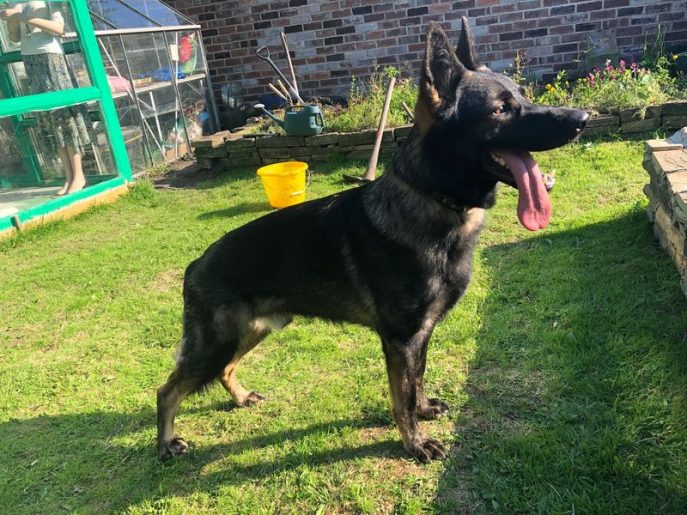 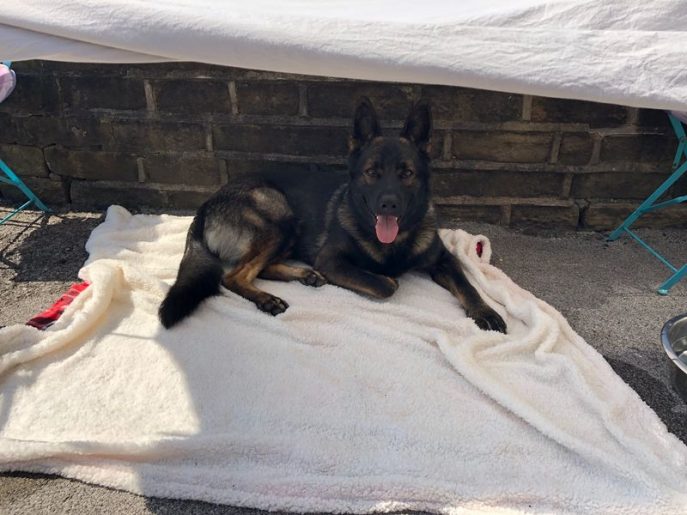 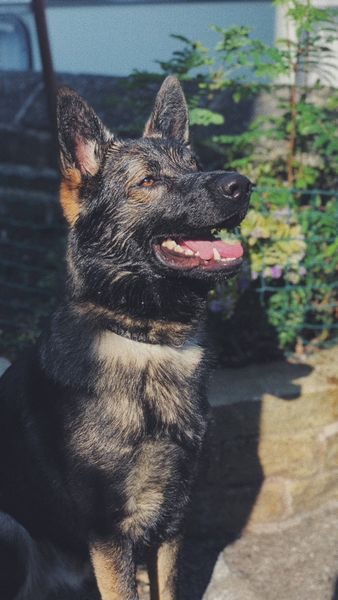 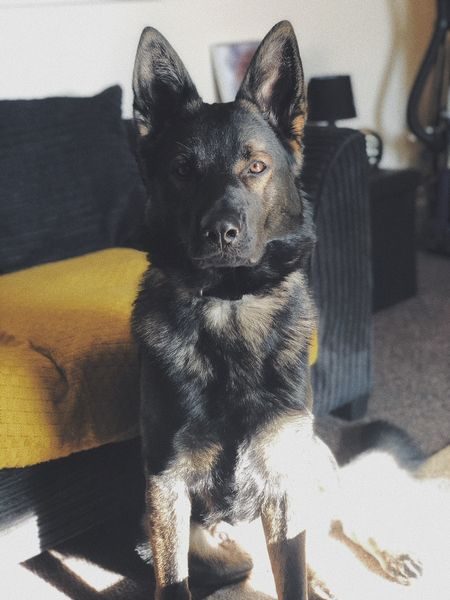 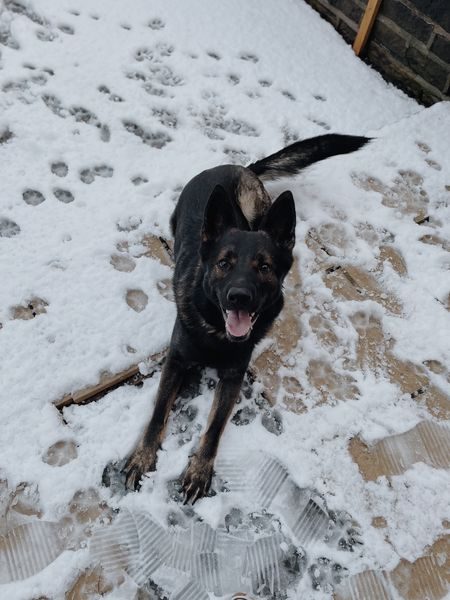 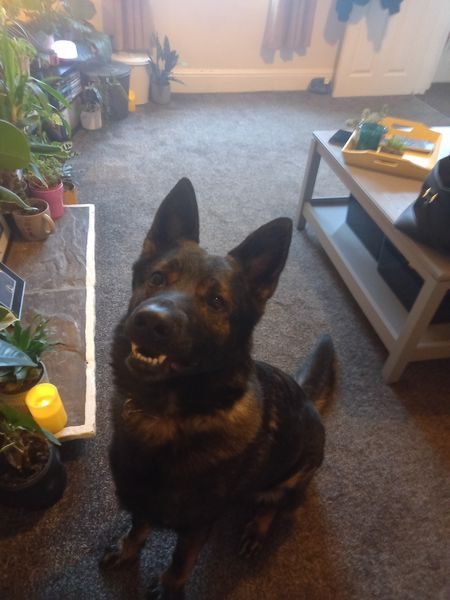 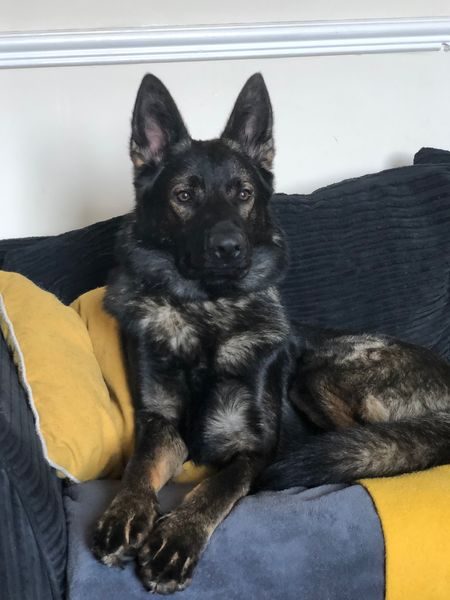 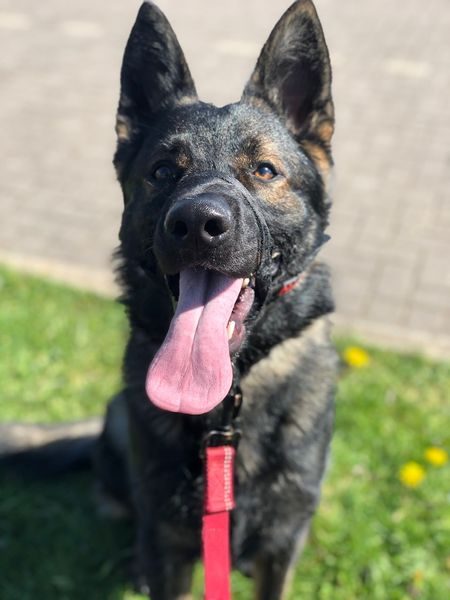 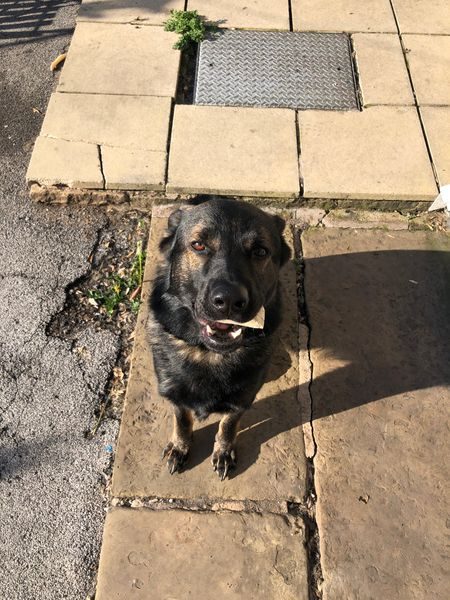 Frankie is available for adoption through GSRE – this is what his current owner says about him.

Frankie is a 3-year-old, male, short haired, black and tan Czech Shepherd. He is not currently neutered or vaccinated. He is flea treated but not currently wormed. He is microchipped. He has a wheat allergy and no disclosed medical issues other than when he was a puppy when he was riddled with worms and intestinal bacteria which, after medication, has not caused him issues since. He is fine during vet visits but will react to other dogs if present.

Frankie is being rehomed through GSRE as his owner does not have time to work on his behavioural issues (reactivity) or exercise him as much as he should be.
Frankie is good with older children who visit the owner’s home, where he lives with another dog (staffie cross JRT). His reaction to cats is unknown but he does not like cows. He is reactive/aggressive towards other dogs outside of the home. He has never shown any aggression towards people and has never bitten.

Frankie is described as being over-excited and friendly to visitors and deliveries to the home. He travels well in a car and does not bark excessively. He currently eats a mix of wet and dry food in the morning and dry food in the afternoon. He needs wheat free food and treats due to an allergy.

Frankie lives indoors and is housetrained. He is currently left alone at home for 8 hours daily and is crated in the kitchen during that time. At night, he sleeps in an upstairs bedroom with his canine companion. Frankie is described as liking classical music when left alone.

Frankie has lived in his current home since he was bought from the breeder at 4 weeks old.
Frankie is reactive to other dogs when walked on a lead and although he does have a recall, he will only return if there are no distractions. He knows sit and down and does not have any possessive tendencies around toys or food.
During the time the GSRE assessor spent with Frankie, this is what they said about him.

Frankie is a very smart and friendly dog.

Frankie was bouncy and excited when greeting the assessor who describes him as a very affectionate dog. The assessor walked him briefly with the current owner’s partner and found him to be easy to handle as he was distractable by treats and managed to keep his focus (briefly). Frankie was hyper-aroused as soon as he saw the lead and did pull quite strongly when he saw another dog, giving high pitched barks and getting over-excited.

When walked, Frankie reacted when he saw a child across the road, the assessor believed it was excitement rather than aggression. It would appear that Frankie has not been socialised with other dogs except the one he lives with. He may be able to live with older children as his current owner has nephews and nieces that visit her and he plays well with them. The assessor believes that Frankie might benefit from living with another dog but that would depend upon a careful introduction as he isn’t very good at ‘meeting’ new dogs.

Frankie is currently walked every other day for about half an hour (dependent upon how reactive he feels) and once a week he gets to run free in an enclosed field with his canine friend. Frankie lives with a Staffie/JRT cross who he gets along well with.
Frankie is a very smart, friendly boy who is bursting with energy. He appears to be in excellent health with bright eyes, good teeth and a healthy coat. He seems to be an affectionate lad and with some simple work and regular exercise, his behavioural issues would improve. The assessor believes that Frankie would respond well to behavioural training as he is smart, focused and treat orientated.

Location:
Huddersfield - Own home
Sex:
Male
Age:
3
Neutered:
No
Good with children:
Yes - Older Only
Good with other dogs:
Selective
Good with cats:
No