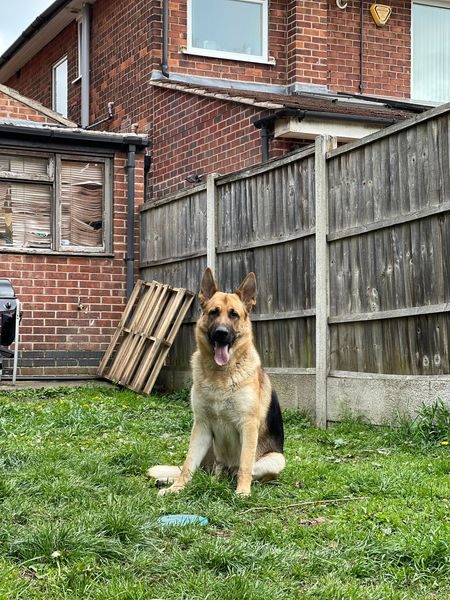 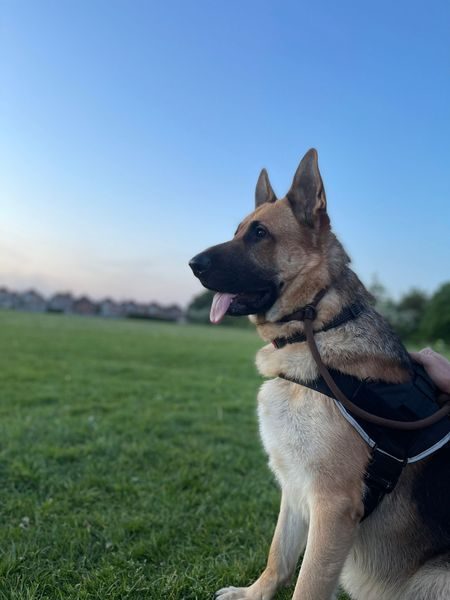 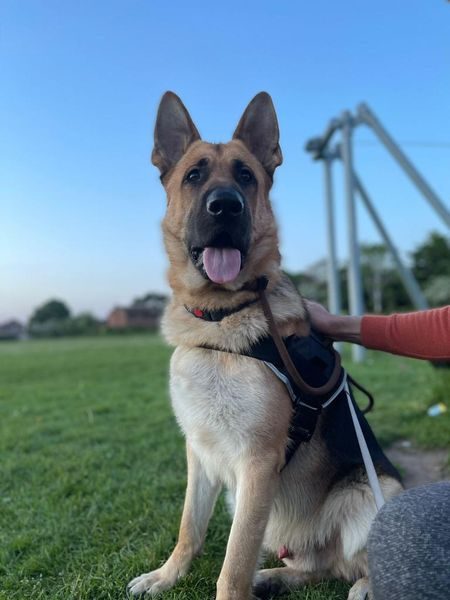 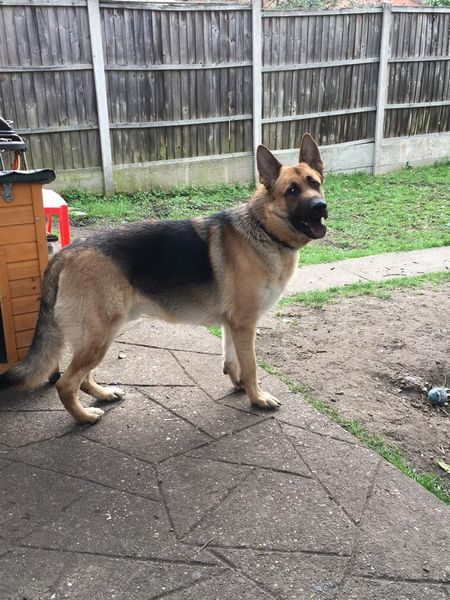 Mando is available for adoption through GSRE – this is what his current owners say about him.

Mando is a 14-month-old, male, short haired, black and tan German Shepherd. He is not currently neutered but is microchipped and up to date with his vaccinations/worm/flea treatments. He has no disclosed medical issues but did become quite itchy at some stage which a change in food seems to have addressed. He is currently eating twice a day (7am and 7pm). He was eating kibble but currently eats a fish based wet food with some cooked chicken. He is described as being ‘fairly good’ at the vets but hasn’t been many times. He has lived in his current home since being 8 weeks old when he was bought from a private breeder.

Mando is being rehomed through GSRE as his current owners have to move to smaller accommodation soon and the family can no longer give Mando the time that he needs/deserves.

Mando is good with children, having experience with living with two ages 6 years and over. He has never lived with another dog but his current owner is confident that he would be able to live with one as he interacts well with dogs when out, albeit will sometimes bark from a distance (excited?). He is good with the two resident cats and does not chase them. His reaction to livestock is unknown.

Mando has never shown any aggression or bitten anyone. He will bark when someone leaves the house but not when visitors come in – even if he has not met them before. He is a very friendly boy who is confident and does not get scared by noises like fireworks etc. He is an intelligent dog who picks up commands quickly and enjoys his treats, especially cheese!

Mando lives indoors and is fully housetrained. He is currently left alone for up to 4 hours (on average) during which he is crated. He travels well in the car but can get travel sick in the boot but not when he’s on the back seat. He pulls strongly when walked on a lead, the currently owners state that a head collar didn’t work with him. He has a selective recall when off-lead but a good recall when walked on a longline. He also knows sit, down, come and wait (for food). He does not show any possessive tendencies over food or toys but will sometimes grumble if playing with a new toy but will soon hand it over.

During the time the GSRE assessor spent with Mando, this is what they said about him.
When the assessor arrived to see Mando they were not greeted by barking at all. Mando was in an open top crate in one part of the lounge and was standing up against the crate to greet the assessor. There was still no barking and the assessor went across to see him. He got excited, had a few treats and sat upon request. He settled quietly in the crate as the assessor and owner talked.

He is a lovely dog and will hopefully be adopted quickly. He is very good with the 6-year-old child and the two cats which he isn’t particularly bothered about (no chasing). The owner says he gets on with other dogs when out, and is confident that he could live with another dog. He is food orientated, especially for cheese! He doesn’t seem to have any common problems such as guarding/obsession, and seems a lovely easy going, energetic, young dog. He gets out in the garden and does have free access to part of the lounge.

In summary, Mando is a lovely dog! He’s been socialised to some degree and has mixed with other dogs and people in the park. He seems intelligent and easy to train, but a bit stubborn when he wants to be. He would quickly become a lovely family member with people that have time to spend playing and training him. He just needs some attention and company.