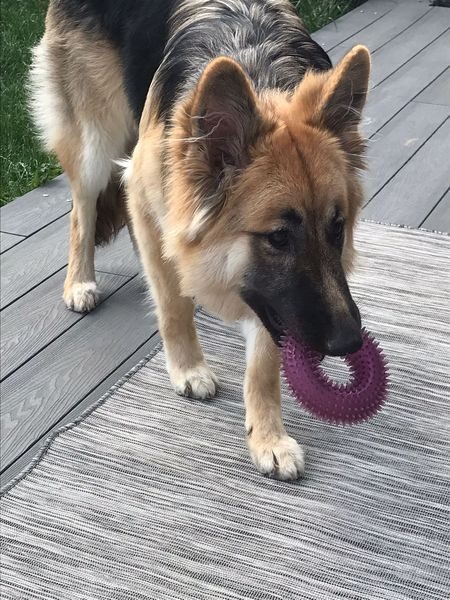 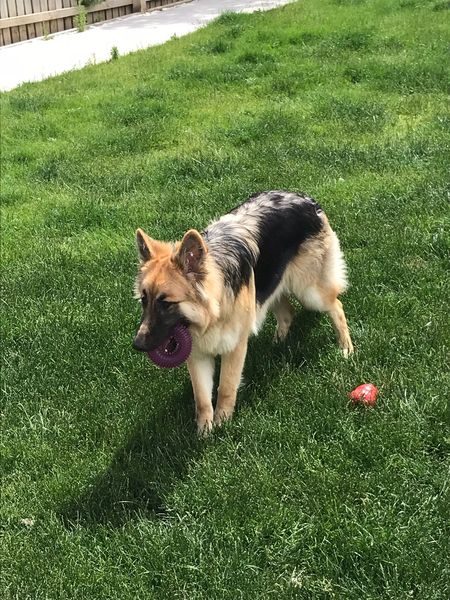 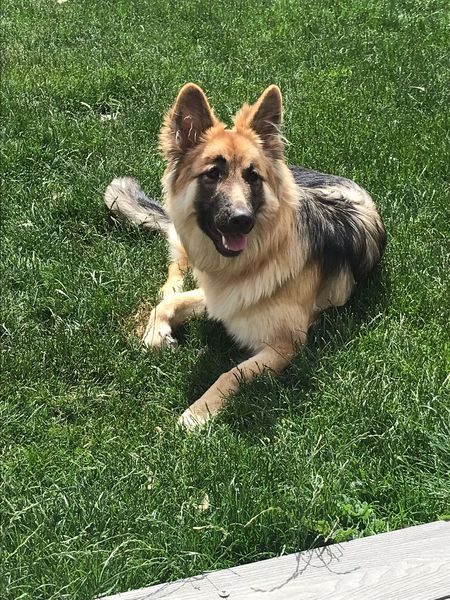 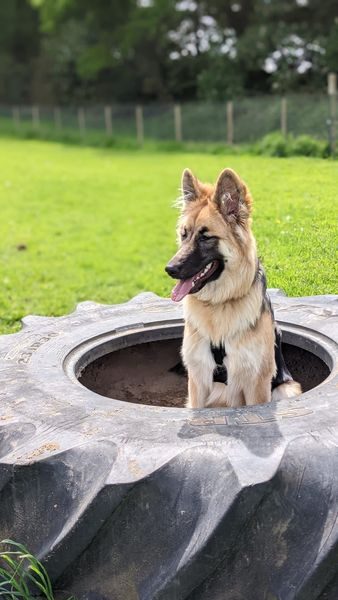 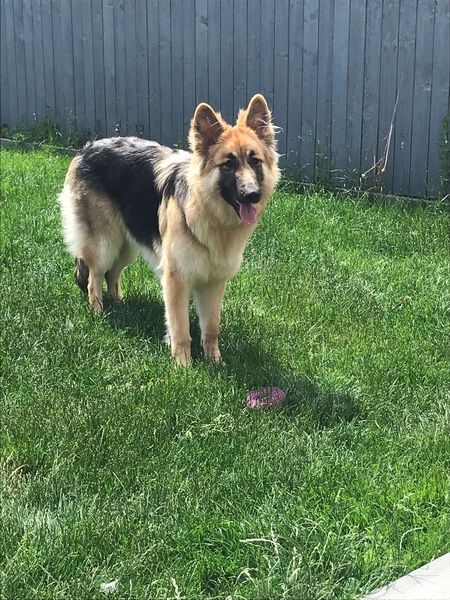 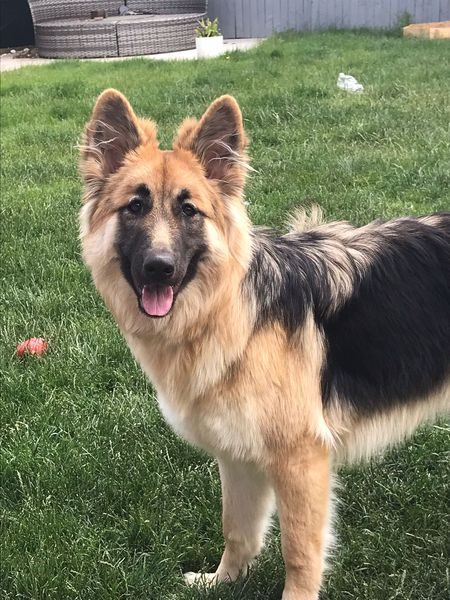 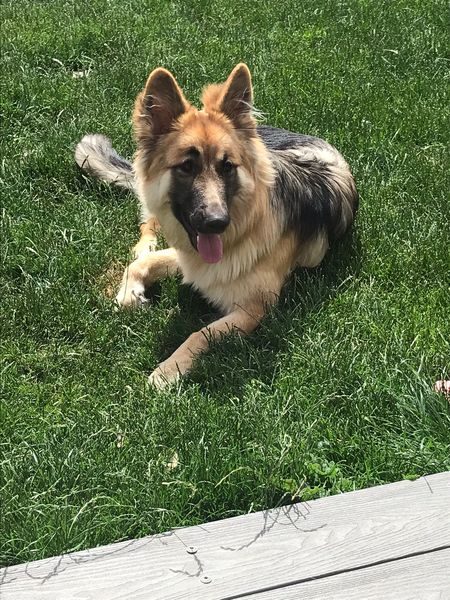 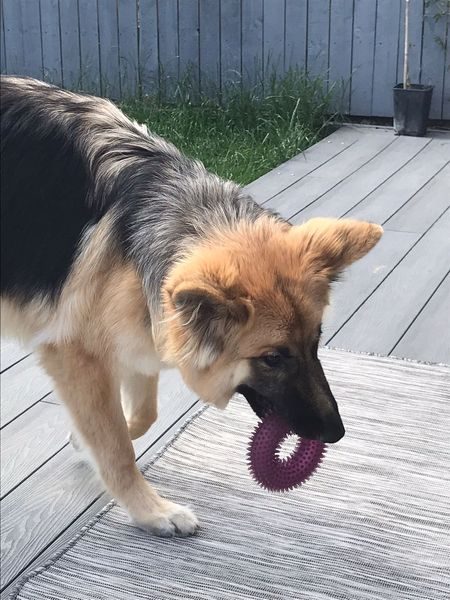 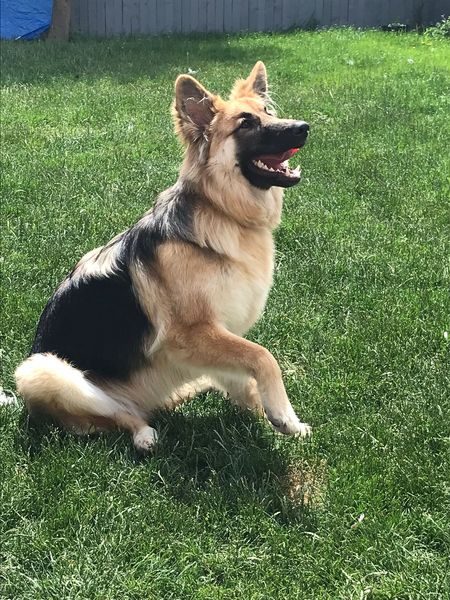 Misha is available for adoption through GSRE – this is what her current owner says about her.

Misha is a 7-month-old female, sable, German Shepherd with semi-length hair. She has not had her first season yet so is not neutered. She is micro-chipped, vaccinated, wormed and flea treated. She has no disclosed medical issues but she may have some sensitivities to certain food. She was initially fed raw food but her trainer suggested a change to pressed raw which may have helped with her eyes which were runny prior. She has been in her current home since she was 8 weeks old.

Misha is being rehomed as her current owner was working from home but was recently made redundant. This has forced them to get a different job which takes them out of the house daily and they do not feel it is fair to spend so much time away from Misha.
Misha is described as being good with children of all ages but please keep in mind she is a puppy and will still mouth at times when over-excited. She is good with dogs and just wants to play with them (attends doggy day care at present). She is not good with the neighbour’s cats and will chase and bark at them. She has seen a horse but was not bothered by it. She will also chase deer and rabbits if she gets a chance!

She currently lives with another dog (10-year-old male Pug) with no issues stated.
Misha has never shown aggression/bitten anyone. She does not bark at visitors or deliveries to the home. She can be left between 2-4 hours and at present is crated when left. She loves travelling in the car. She lives indoors and is fully housetrained – Misha will ring a bell to ask to be let out to toilet.

Misha is currently walked on a long line and is working with a trainer on short lead walking. She has been working with a positive reinforcement trainer since she was 11 weeks old, taking her twice weekly for two hours to improve her social skills with other dogs (she wants to say hello to every dog she meets!). She knows sit, paw, touch, wait, down, place, off, find-it and drop-it. She likes enrichment games and uses a snuffle mat, lick mat, Kong etc. She also loves cardboard boxes and plastic bottles! She enjoys playing with the hosepipe but isn’t too keen as yet on a paddling pool.

Misha does not have any possessive tendencies over food or toys and it described as being good at the vets but excitable if other dogs are present. She is good with loud noises like fireworks (watches them in the garden) and is happy going to the groomers. She is crate trained and will happily snooze in there but does sleep upstairs in her current owner’s bedroom overnight.

During the time the GSRE assessor spent with Misha, this is what they said about her.
Upon arriving at the home, the assessor was greeted very nicely by Misha after ringing the doorbell with no barking or jumping up, she was very well behaved. She followed the assessor for attention and fuss and after a short time she wandered off into the garden, returning periodically for attention.

The assessor believes that whoever takes Misha is going to be a very lucky person as she is a well-rounded puppy with a great temperament. She has a good knowledge of many commands and her owners continue to teach her new ones. She will very much flourish in the correct home.

Location:
Hull - Own Home
Sex:
Female
Age:
7 month
Neutered:
No
Good with children:
Yes - Older Only
Good with other dogs:
Yes
Good with cats:
No