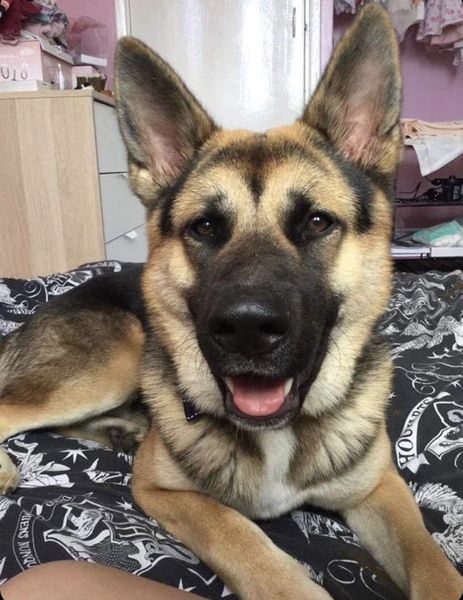 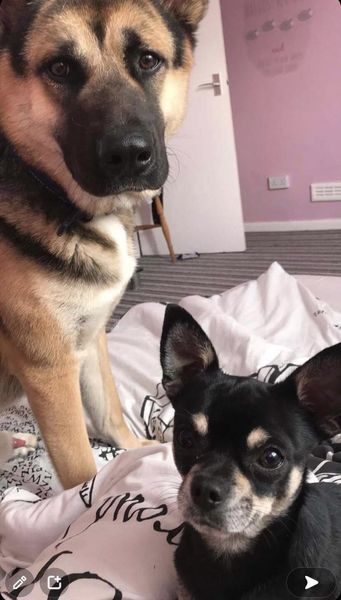 Kray is available for adoption through GSRE – this is what his current owner says about him.

Kray is a 3-year-old, male, semi haired, black and tan German Shepherd cross Akita. He is not currently neutered but is vaccinated, flea treated and wormed. He has no known food allergies and other than having a lump removed on his cheek at some point, he has no disclosed medical issues. He can be cautious of people touching his ears. He currently eats dry dog food which is left down all day.

Kray is being rehomed through GSRE as one of his owners works away, leaving the other at home with a 3-year-old child, 2-month-old baby and another small breed dog. They are very upset but believe that it is the best thing to do for Kray.

Kray is good with children of all ages but is selective around other dogs. He is not good with cats and it is unknown what his reaction would be towards livestock. He is currently living with another dog (small breed). He can be left alone for 3 hours in his crate (crate trained). He travels well in a car and does not bark excessively. He has been in his current home since 8 or 9 weeks old.

Kray has never shown aggression or bitten anyone. He will bark when people knock on door but will just sniff and remain calm if people enter the house. He lives indoors and is housetrained. He can be strong on the lead but does come to heel. His recall is not good and he knows sit and paw. He is not overly keen on being brushed.

Kray does not have any possessive tendencies over food or toys. He takes everything in his stride, including trips to the vets.

During the time the GSRE assessor spent with Kray, this is what they said about him.
When the assessor knocked on the door Kray could be heard barking initially. When entering the house, he sniffed the assessor but did not jump up. He followed them into the house where he stayed nice and calm.

Kray is a beautiful GSD cross Akita. He is gentle, well behaved and was very calm around the baby in the house who was in a baby-bouncer. He allowed the assessor to take a chew away from him and came over, offering his paw, politely asking for it back.

He appears to be a calm dog who, the assessor was told, has never knocked over the 3-year-old child who lives there. His only flaw is his lack of recall and that he can be selective with other dogs although the assessor saw no sign of this during their visit, only positive interactions with other dogs.

Kray will make a great addition to a new loving home.

Location:
Sheffield - own home
Sex:
Male
Age:
3
Neutered:
No
Good with children:
Yes
Good with other dogs:
Careful introduction
Good with cats:
No