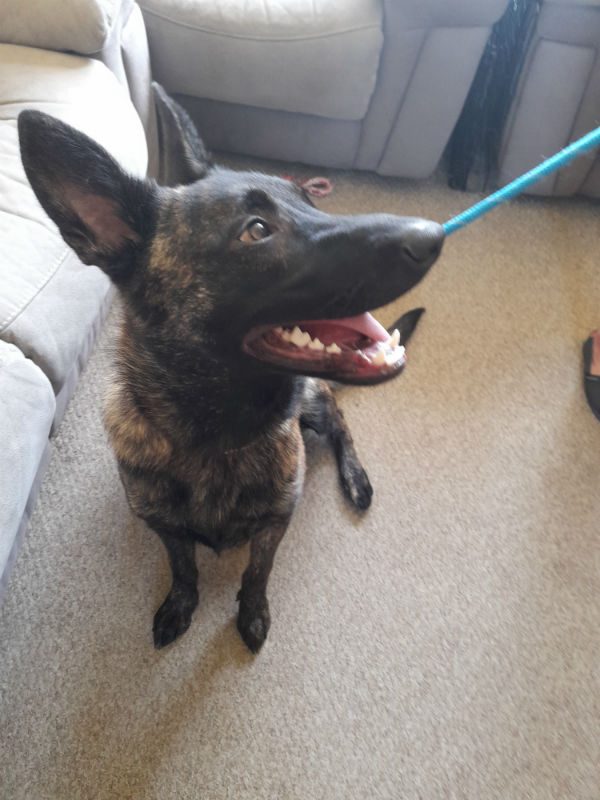 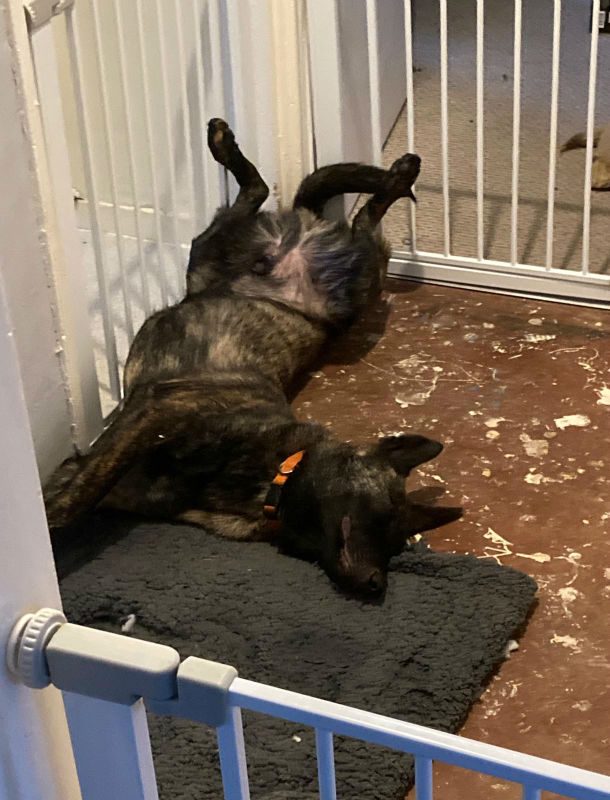 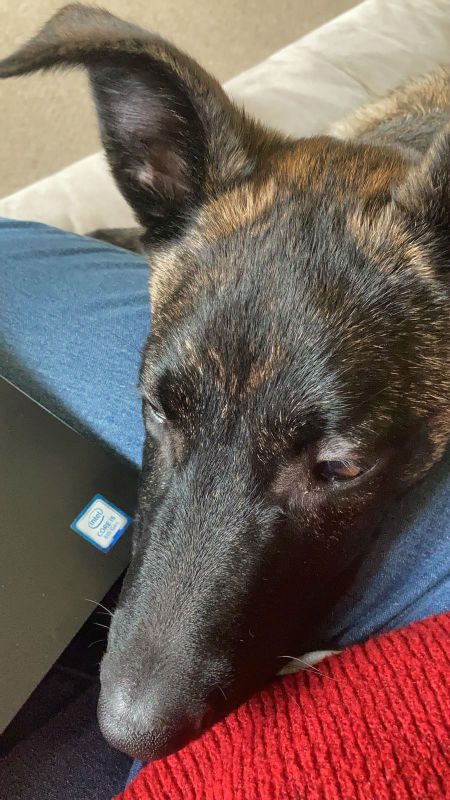 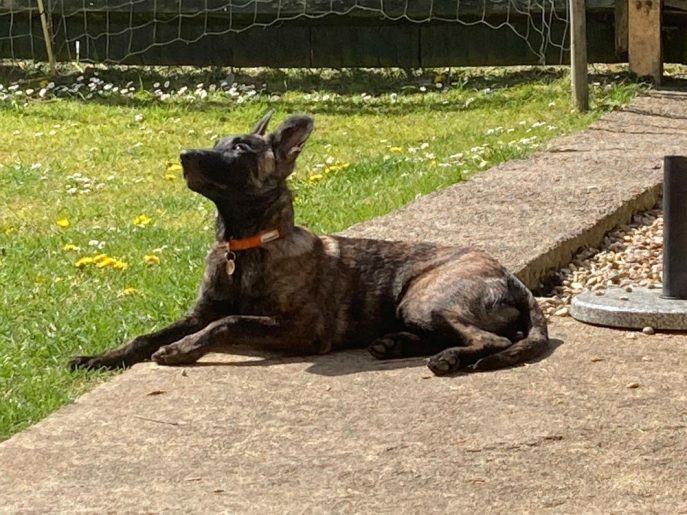 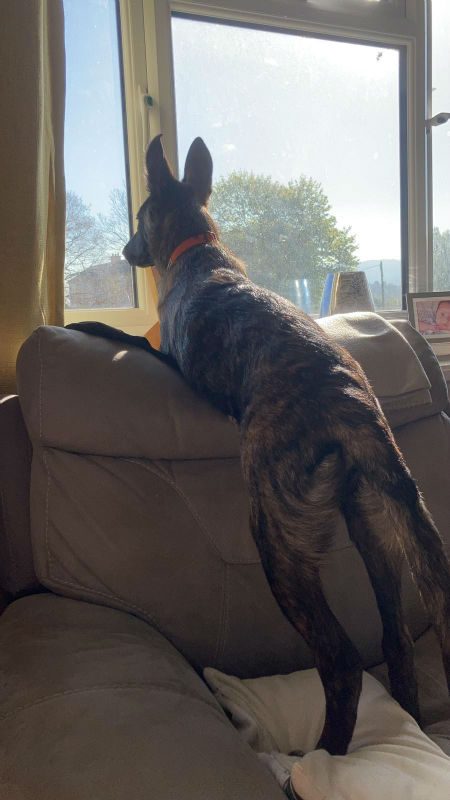 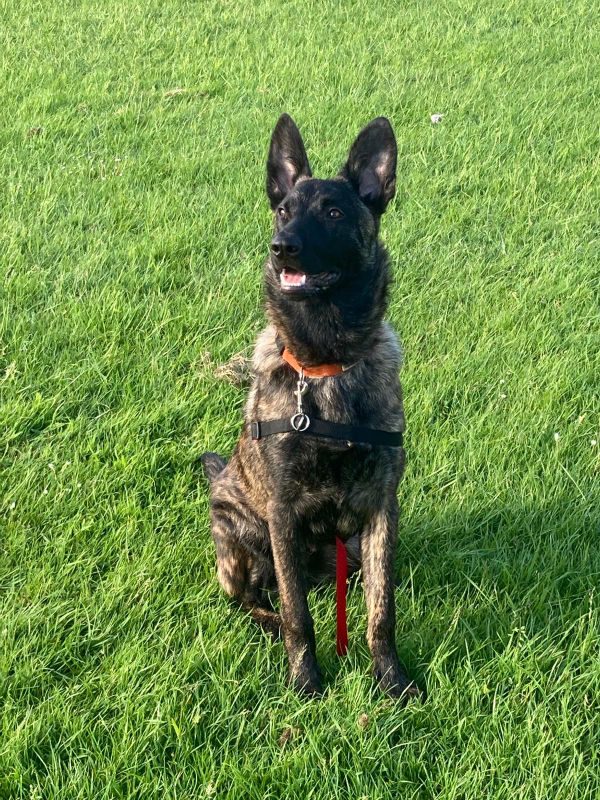 This very handsome and energetic young lad is Oliver. He is an 8 month old Dutch Shepherd.

His owners are trying really hard with his training but sense that they are failing to meet his needs due to lack of experience and time. He is typically very high energy to the point of being almost hyperactive and the owners feel that his behavioural problems, although not by any means  irreversible, are not being helped by their best efforts and the sooner he can go to a more experienced home the better chance he will have.

The owners have sought professional help and are within their capabilities following that advice and will continue to do so whilst he is with them.

He is currently the only dog in a family with older children. He has never lived with another dog; he will chase cats and is likely to chase livestock.

He is still entire, micro chipped and vaccinated. His flea and worming treatments are up to date.

He is not a big fan of the vets and had to be muzzled on his last trip as a precaution.

He is pretty much un-socialised with other dogs and will pull towards them barking.

We are told he travels well in the car.

The volunteer who visited Oliver said.

On arrival at the home Oliver was on a lead as he gets over excited when visitors come calling. He will bark and jump up. It took him some time to calm down which he did with the use of treats / toys. It’s probably true to say that he is territorial, which is not necessarily that unusual and there are a number of approaches to dealing with the problem but the owners are struggling to adjust this behaviour.

It’s true to say that Oliver doesn’t appear to have an “Off” switch. He is on the go constantly and if you stop paying him attention he can be very vocal until you reengage with him.

He has a short attention span but when he did engage with me he was very attentive, he gave me great eye contact and was very happy to show me all the basic commands. At his best he showed me great restraint and impulse control by not taking the treat from my open hand until given permission to do so. All of which leads me to believe the right person will get the very best from Oliver and help him achieve his potential.

Oliver can be a chewer, especially when he’s being ignored or he is frustrated.

He is crate trained but he gets distressed if he is left in it when there is no one at home. He is left for short periods of time with restricted access in the property which his owners say he is fine with. He will use the crate at night.

We did take Oliver for a short walk. He picked up on the clues that I was packing away to leave and again became over excited, barking and attempting to physically herd me, as if he now didn’t want me to leave. He is currently walked using a slip lead. He has previously slipped out of a harness and flat collar.

He is strong on the lead. He was hyper vigilant to people and dogs, reactive in so much as he pulled towards them. Responded well when asked to put his nose on the floor and work for the food and easily distracted with the ball and cream cheese which again is evidence towards his trainability.

Oliver is a well-cared for high energy puppy. He is a working breed dog in need of an experienced home that can commit the time and energy required to develop the potential he has so that he can be the best dog he can be. If there was ever a dog who needs an active or working environment with lots of physical and mental stimulation it is Oliver.

Oliver has been taken by Cumbria Police so will hopefully be PD Oliver in time to come.

Location:
Gloucestershire - IN HOME
Sex:
Male
Age:
DOB 13.11.20
Neutered:
No
Good with children:
Yes - Older Only
Good with other dogs:
Selective
Good with cats:
No