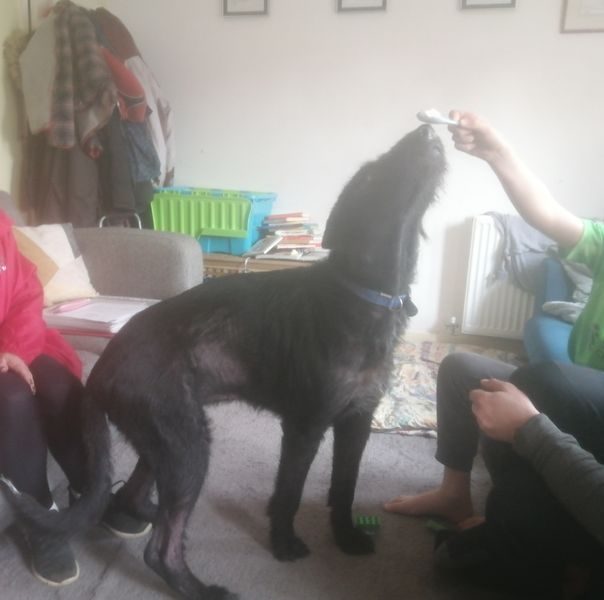 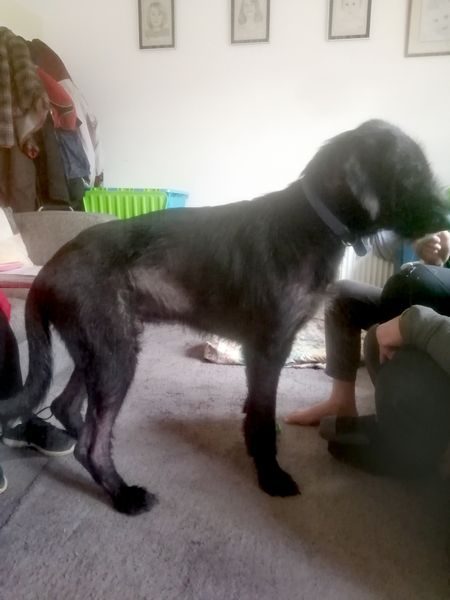 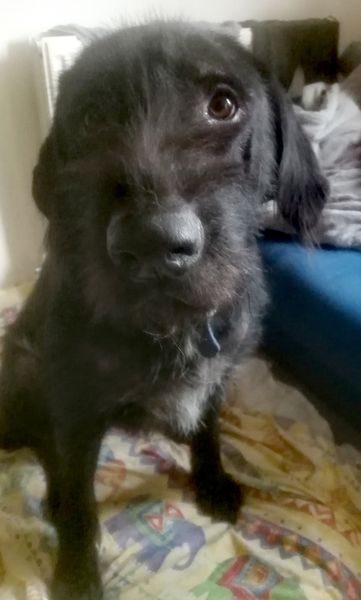 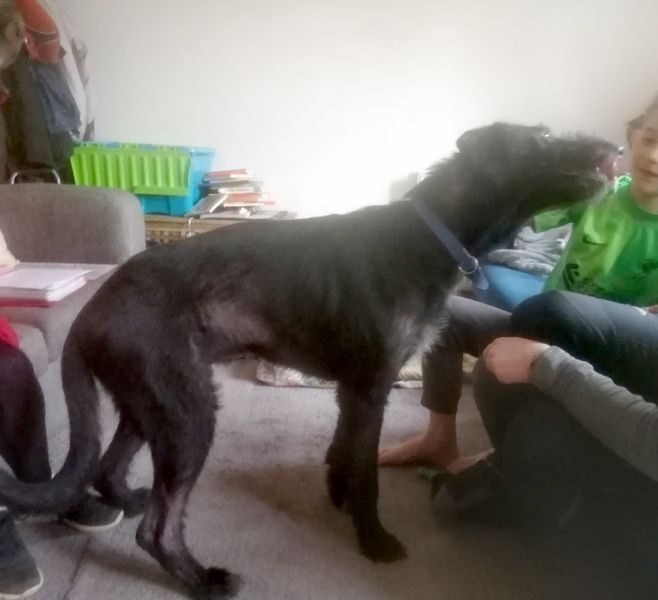 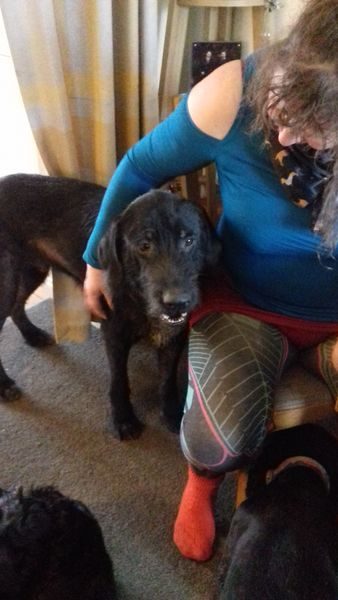 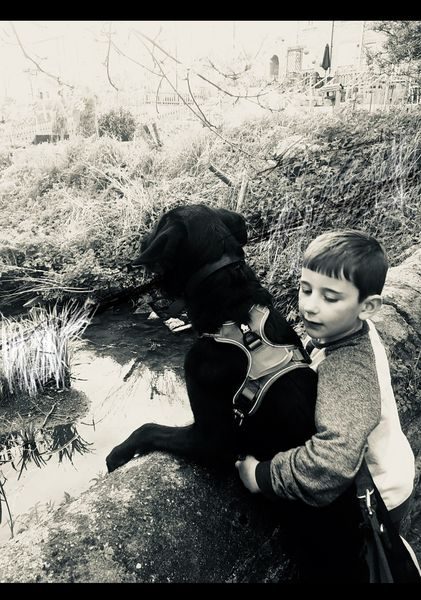 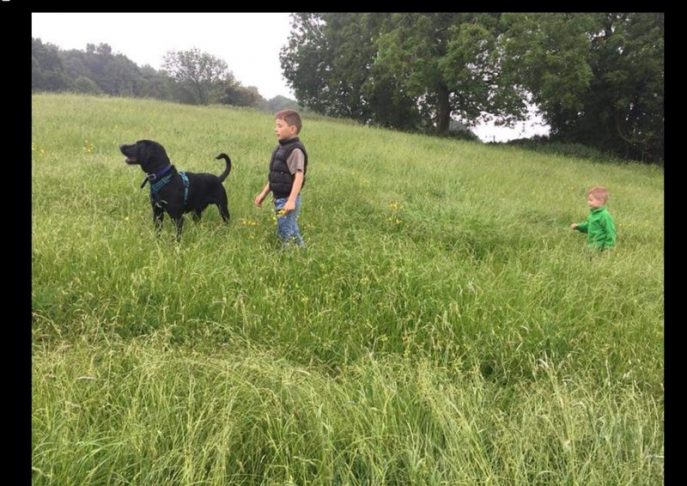 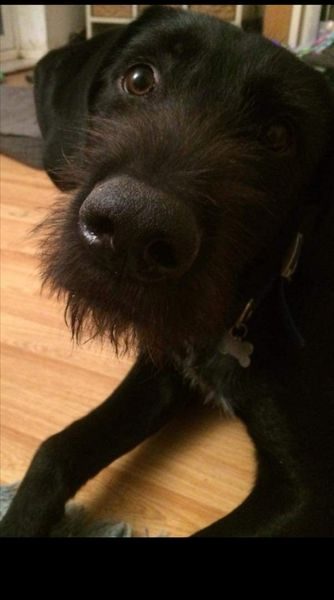 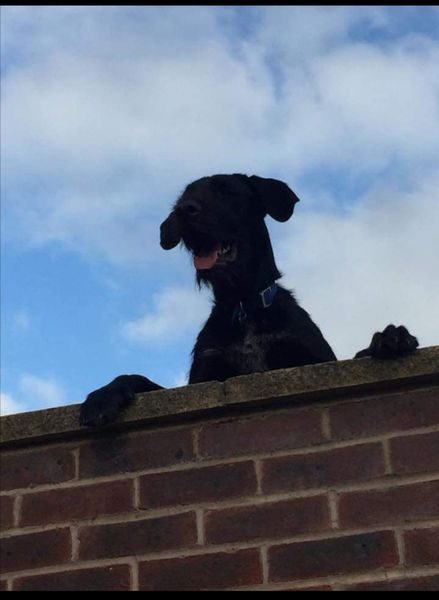 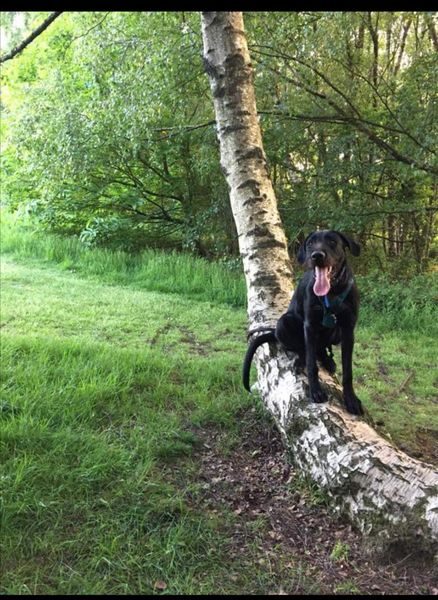 Scruff is available for adoption through GSRE – this is what his current owner says about him.

Scruff is a 4-year-old, male, short haired, black German Shepherd cross wire-haired pointer. He is neutered, wormed, and flea treated but is not currently vaccinated. He is microchipped. This poor boy has a skin allergy which is aggravated by stress in his current home. For this he is currently taking Apoquel. He has no other disclosed medical issues. He is good at the vets.

Scruff is being rehomed through GSRE as his owner feels he requires more time and attention than his current family can provide. He suffers with skin issues which are believed to be aggravated by stress. This stress occurs in his current home where he lives with 6 children aged between 2 and 13 years, all of which are home schooled so present most of the time. When Scruff goes to a local dog sitter his skin issues subside due to him being less stressed and getting sufficient exercise. He currently lives with 3 cats but will try to chase them if outside the home environment.

Scruff is good with children of all ages. He is good with other dogs and is described as playful. When he goes to the dog sitter, he will play with 7 other dogs without any issues. He is ok with cats in the home but is not keen on horses as he was once scared by one. It is not known what his reaction would be to livestock.

Scruff has never shown any signs of aggression or bitten anybody. He will bark initially when people visit the home but soon settles down. He can be left up to 4 hours on his own with no destructive tendencies. He can be sick when travelling in a car but will settle down – possibly anxiety based? He has lived in his current home since he was 12 weeks old when he was obtained through a friend of a friend.

Scruff eats Vitalin dog food, once daily. He lives indoors and is housetrained. He can pull on the lead to start with but will settle after correction. He has a recall but only if there are no other distractions. He knows sit, paw, roll-over, down and back. He does not have any food or toy possession issues.

The GSRE assessor visited Scruff in two locations, at home and at the dog sitters.

In both locations Scruff barked when the assessor first arrived but quickly settled down. He is described as having an absolutely amazing temperament, a real gentle giant who is large, tall, lean and athletic in stature. When at the dog sitters he lives amongst multiple other dogs of all shapes and sizes. He plays with all the other dogs with no sign of aggression. Whilst there he is walked for 2 hours a day in the company of two other dogs. He doesn’t scratch at his skin whilst at the dog sitters indicating he is less stressed, calmer and is benefiting from regular exercise allowing his skin issues to subside.

Scruff is a loveable gentle giant who will undoubtedly flourish in the correct forever home.

Scruff has been rehomed through another rescue.