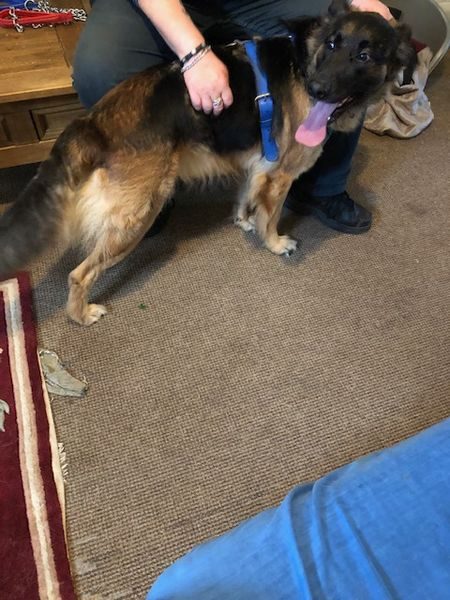 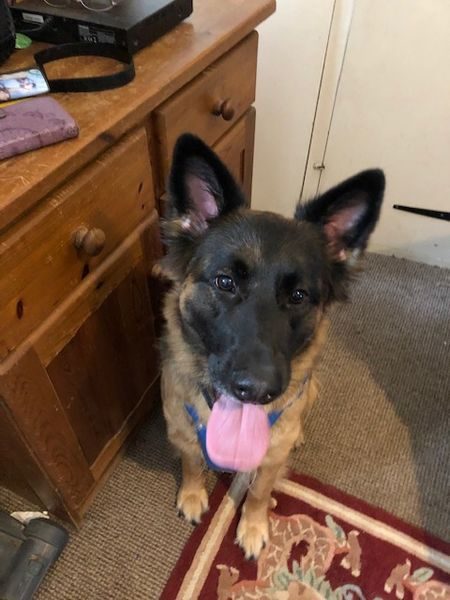 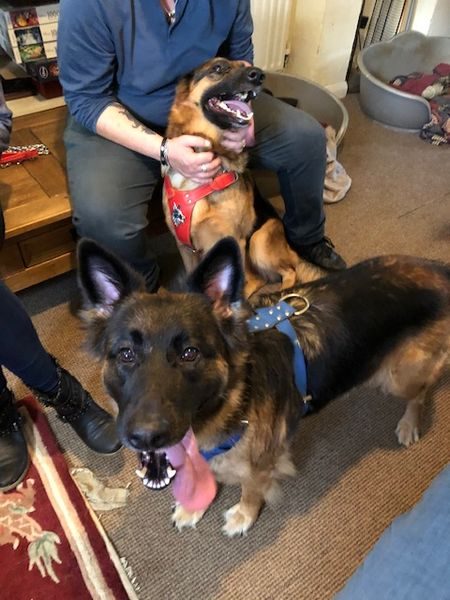 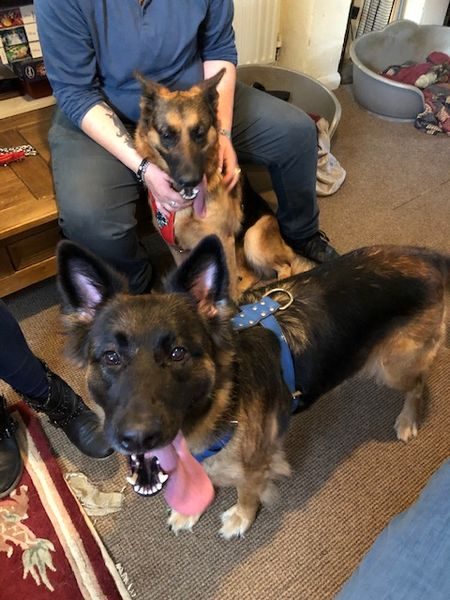 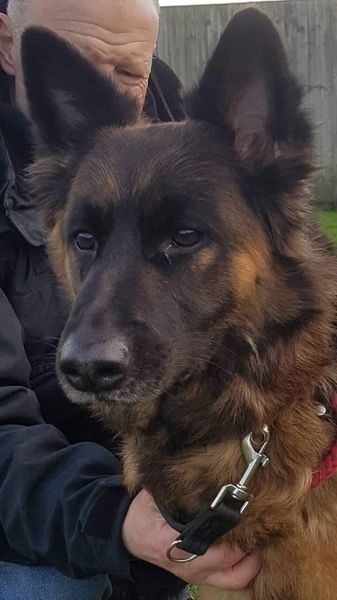 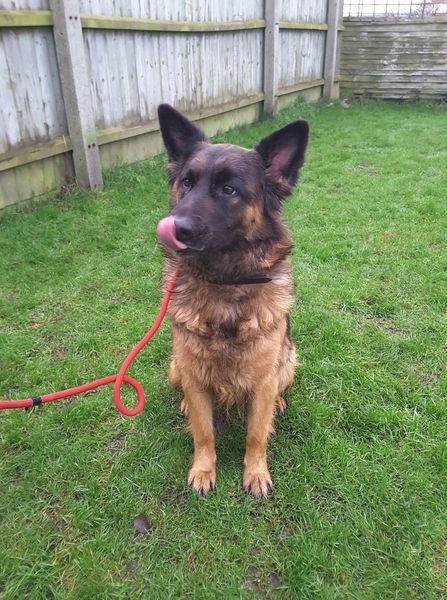 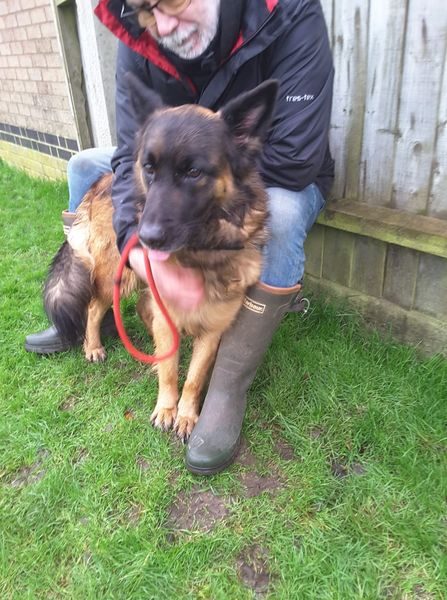 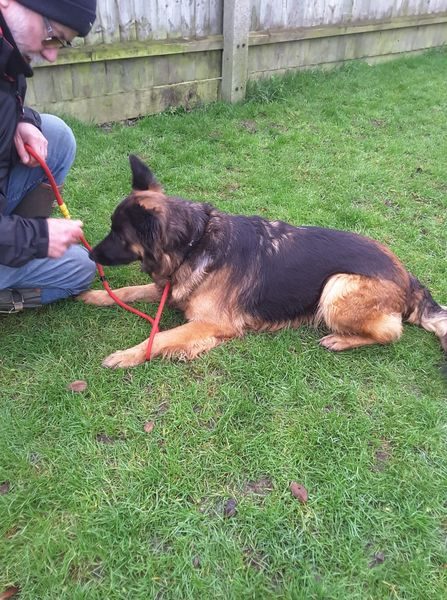 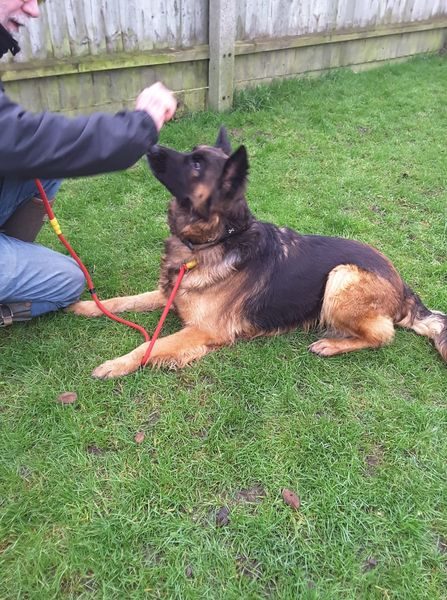 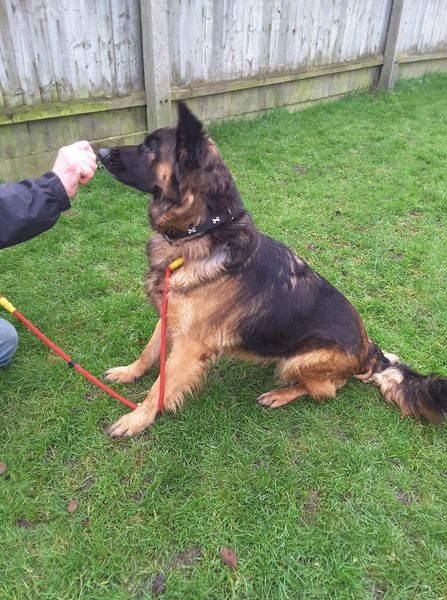 She is fine around children from 6yrs, seems ok with dogs when out on a walk on a lead, unsure what she would be like off lead, unknown with cats or livestock.
Storm is not keen on men and becomes very protective around her female owner. This will need to be worked with in a new home. Gets travel sick, no aggression around food or toys, knows her basic commands, does pull on a walk but not really getting out much at present so this should improve when walked more often. Storm is the more docile of the 2 sisters.

Since being with us:

Storm took time to settle into kennels this was due to nerves and fear. After several days we gained her trust and was able to bring her out on a lead to meet the Grinch at the Christmas party.
She was pleased to be out and said a loving hello to all the volunteers male and female in the paddock, yoffled as many treats as she could and then went back for more fuss. She was still nervous of all the noise from the kennel block and all the other dogs pulling to go back to the safety of her kennel. This has been worked on and she is now happy to come out into the paddock with her vollies for fuss and treats.

Storm met one of our male dogs in the paddock who immediately placed his head over the top of her neck. She responded with a snarl and woof warning him off and after that she was happy to carry on just keeping a careful eye on him with the occasional show of teeth to keep him in his place if he came too close too quickly. To be honest Storm was more interested in treats than in the other dog. She is very treat orientated.

On walks at the park Storm has proved to be a strong girl and prefers to be walked on her collar to her harness. When walked with her sister she pulled to get to her then pulled to be in front even though her sister did keep having little goes at her to put her in her place. When walked on her own she settled a lot better and actually began to relax and enjoy the walk.

Storm finds everything to be new and as wants to investigate it going from one sniff to another as if she’s never experienced them before. It takes about 20 minutes of walking before Storm will calm down enough to stop pulling and listen to her handler, but whilst in kennels this is usual as they don’t get out as much as dogs in a home. She will circle her handler whilst exploring the environment something that now her confidence is improving we are working on. Once calmed down she can walk nicely on a loose lead and listen to her handler and whilst interested in other dogs is becoming easier to distract the more we take her out. Storm has met another on lead dog at the park and with careful introduction was absolutely fine saying a polite hello in the normal doggy fashion of sniffing bums.

Storm has been to a vollies house for a shower and brush up during which she was an absolute star allowing herself to be rinsed, soaped, rinsed, dried and brushed as long as she got fussed at the same time. (this was by a male vollie as well!!!!)