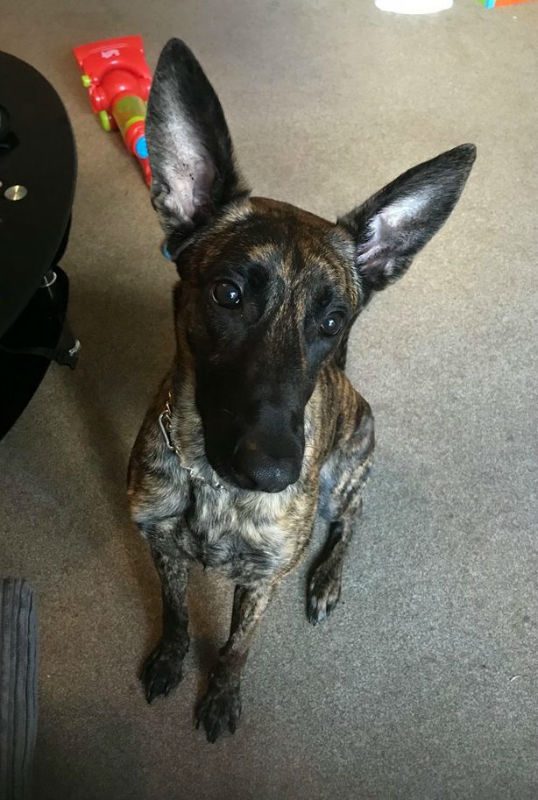 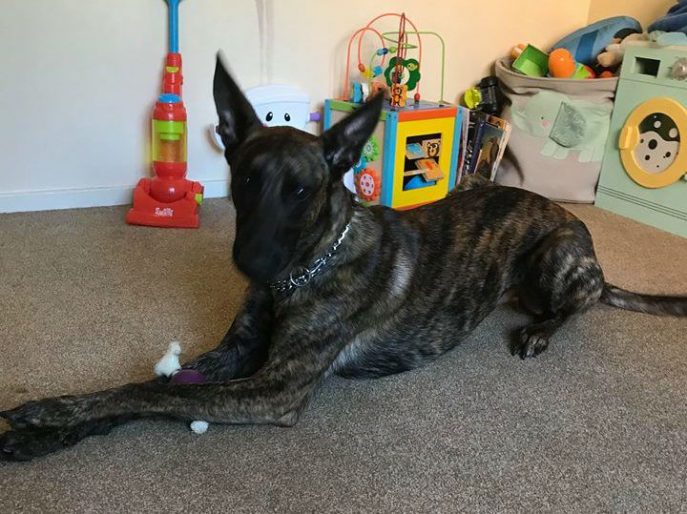 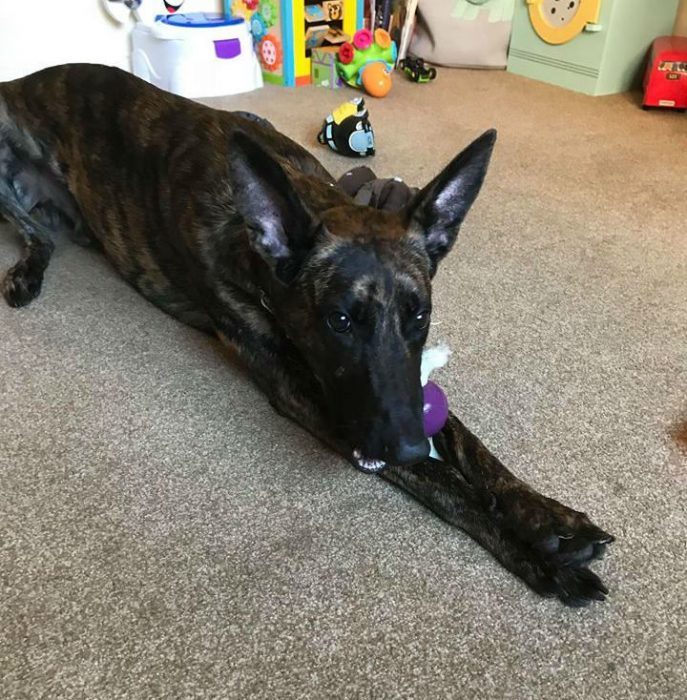 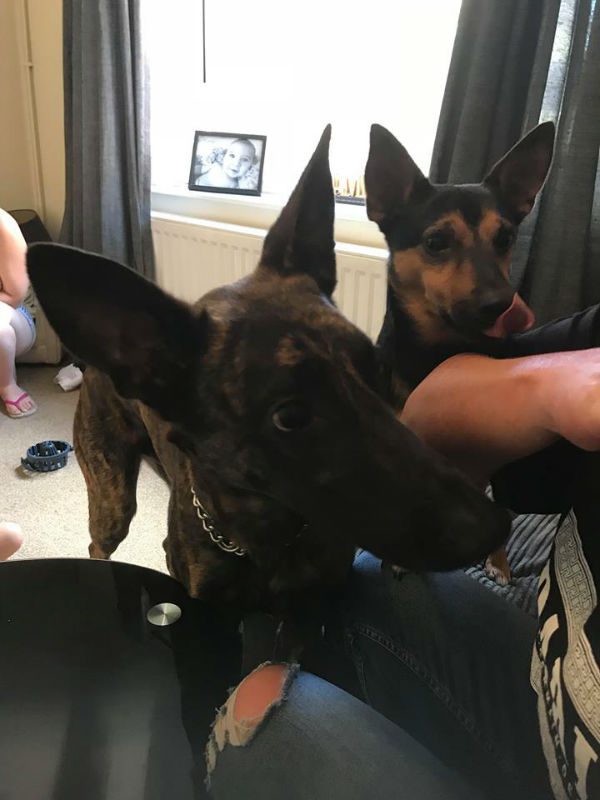 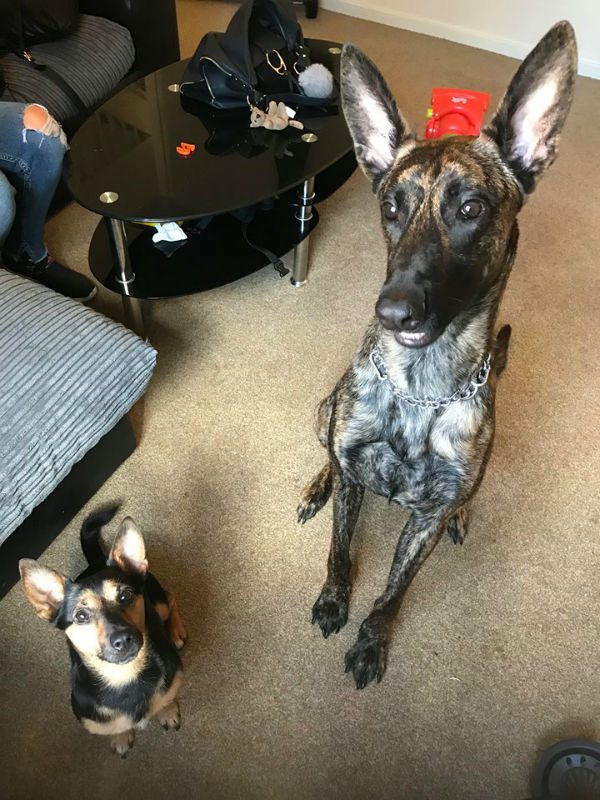 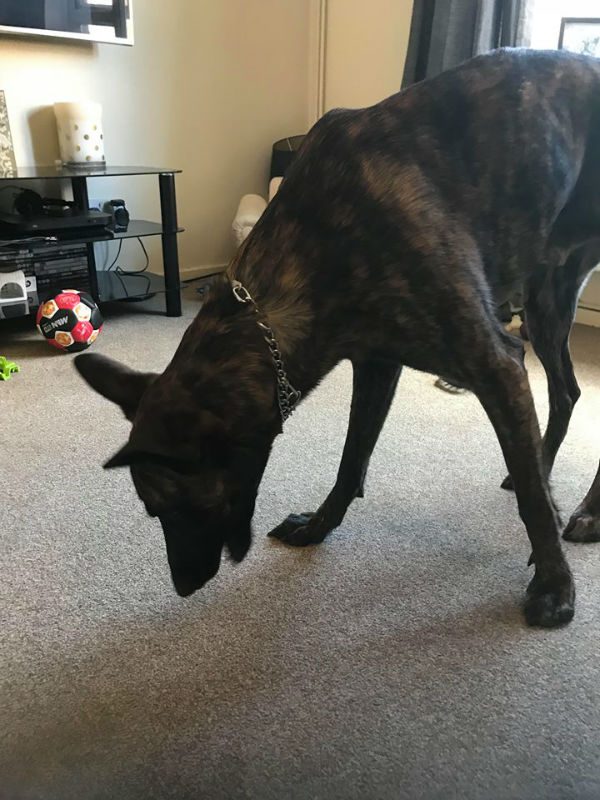 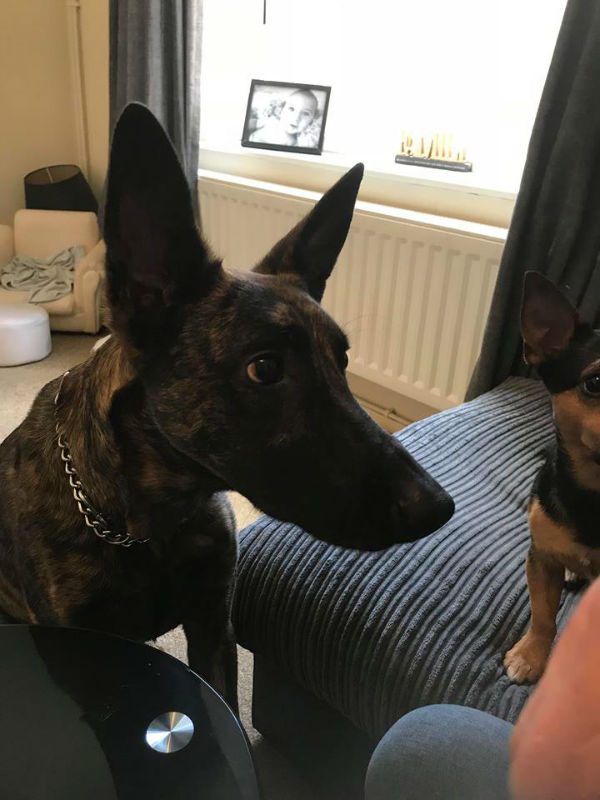 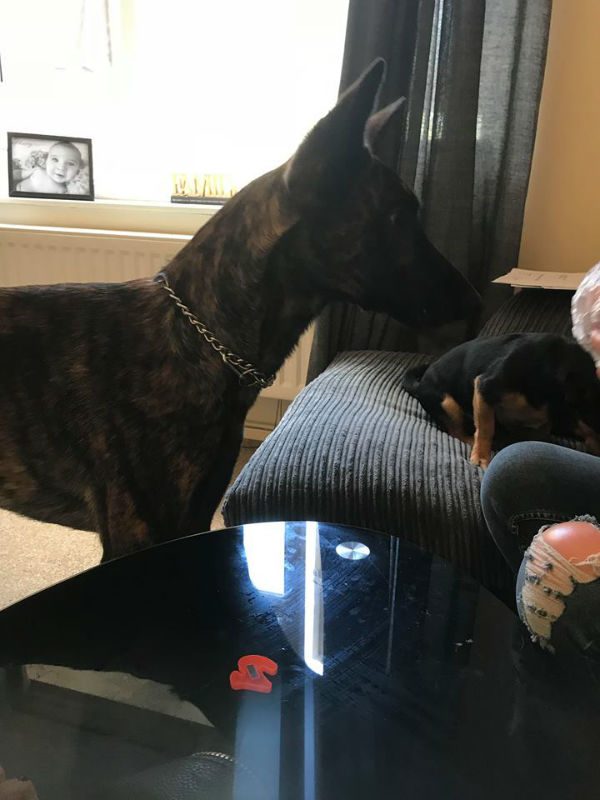 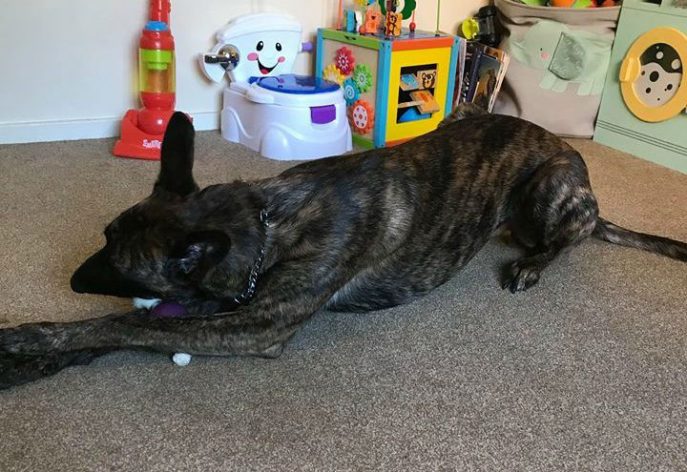 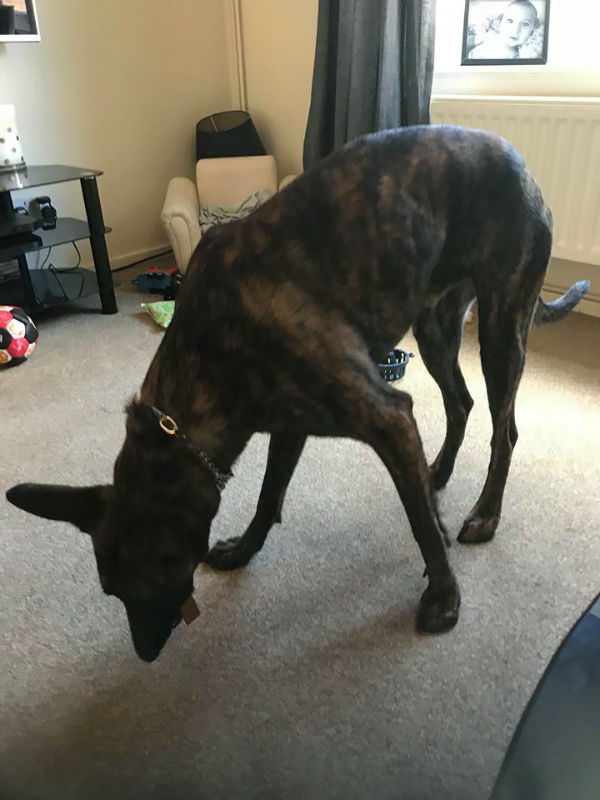 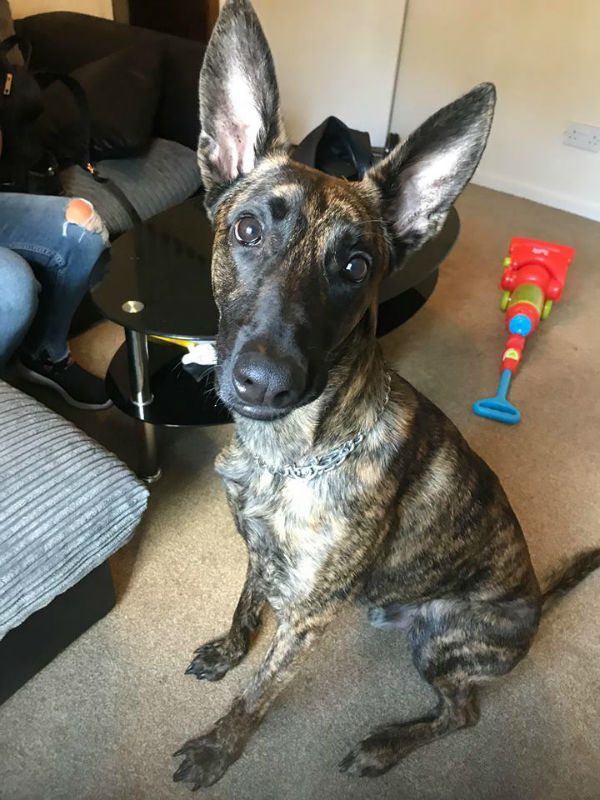 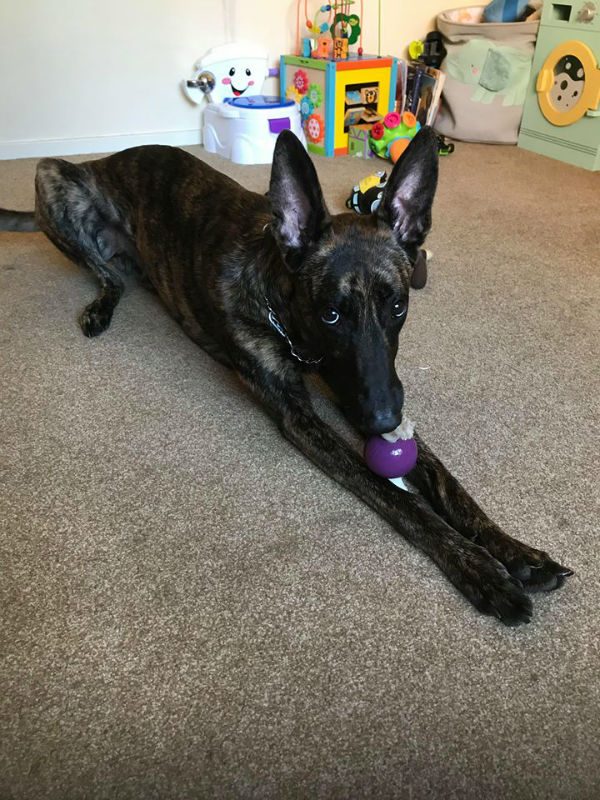 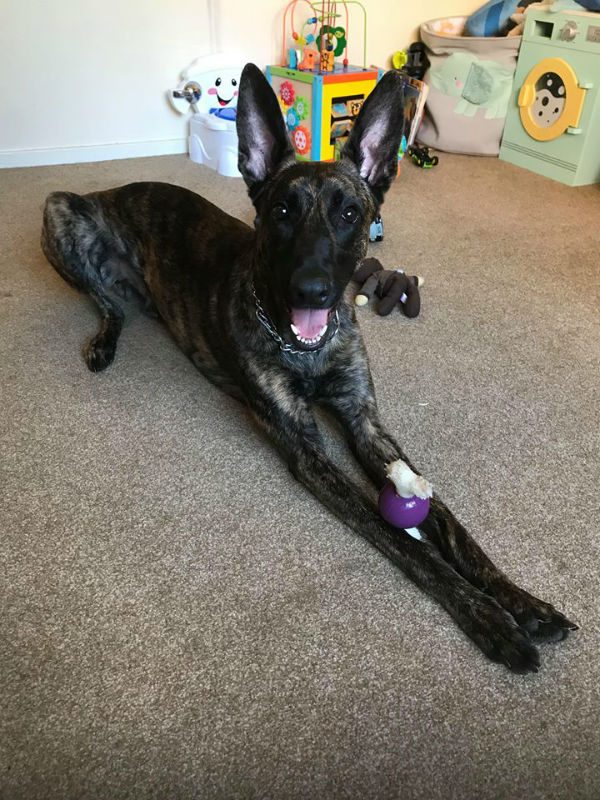 Yes I know, does not look anything like a GSD but he is actually a Dutch Shepherd, or so we are told. Zeus is coming up to 2 years of age. He is neutered and microchipped but vaccinations may need updating. Being rehomed as the family are having to move out of army accommodation and the with a 2 year old and a new baby on the way, Zeus is just not going to get the time he needs. This is what our volunteer said about him:

“I have been to see Zeus today and I can say what a lovely dog he is! I was greeted with him barking with excitement and standing up on the baby gate with his tail wagging excessively. I told the owner to open the gate and straight away he jumped up me giving me a face wash and leaning into me for attention. I sat down and Zeus stayed with me and a little Jrt x who he lives with and there was no jealousy between them both were giving paw and loving attention, he did settle after about 10 minutes and was happy to amuse himself with his toy. He is 2 years old in September and still acts like puppy and he lives with a 2 year old toddler. He does mouth and was mouthing my arm and was hard at times but  stopped when I told him.

The owner said he has had all puppy injections and wasn’t sure when next are due as cannot find vaccination card. He was neutered 2 months ago and did seem in very good health. He was fine at the vets and when they took him back for a check up he was scared and had tail between his legs.

He is playful with other dogs and sometimes will pull on lead when out walking if he sees them as gets excited and wants to play. Owners have said he plays with other dogs over the park and said he can play rough at times and have never seen any aggression from him. He can be left for 3-4 hours and has been known to chew things whilst they have been out but not on every occasion. He is very obedient and knows all basics. He loves a game of tug and will leave when told and also was great for handling – I picked up his paws, checked his mouth, led him by the collar with absolutely no reaction from him. He was a great all rounder.”

How can you resist those ears and legs!

Zeus has been rehomed to a friend.