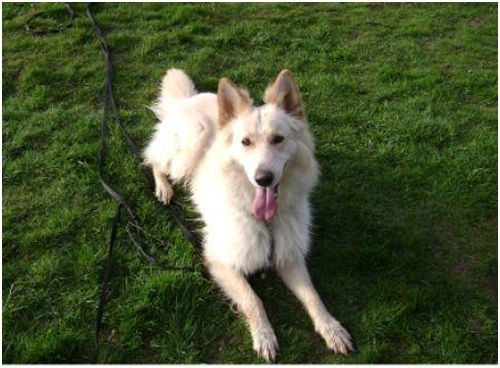 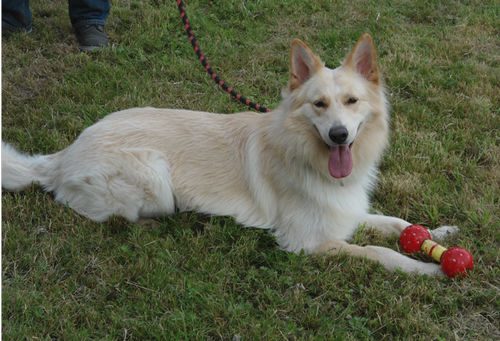 Archie is 3 and is neutered. This poor young lad has now been in foster for quite a while. This is what foster mum has written.

Archie was a very nervous little boy which came out in aggression when I first picked him up he did want to nip me but as soon as we got him home we put him in his pen and left him to settle the night. In the morning I took him some sausages (to bribe him) it took a little time to come to me but he did and I put his lead on for his walk and from that moment he was my best friend. We don’t think he’d been walked too much as he is not too keen on getting his feet wet and dirty and doesn’t like stones in his pen. Once he settled after a couple of weeks he came indoors with a gate between him and our dogs which  he was nervous of but settled and later after several weeks we let him in with ours and they have taught him to play. He has since been introduced to other foster dogs who he has become good friends with.

Once he knows you he will he is a sweet little boy who can be scared of the outside world but getting better all the time. In his home environment he is the most loving and well behaved dog you could wish for. Loves his toys and cuddles. Introduced to other dogs the right way he loves to play with them and has been learning how to play. He shares his toys with his new friends and loves you to throw them but does need work on his recall he is such a cheeky lad and very intelligent. Loves to travel and is a well travelled little boy as comes with us each weekend to different parts of the country.When he goes out he trots by your side happily unless there are other dogs about.

We would not rehome Archie with children and he does not like small dogs. Are you that special home?

Archie is staying with his foster home.

Archie passed over Rainbow Bridge after many happy years.