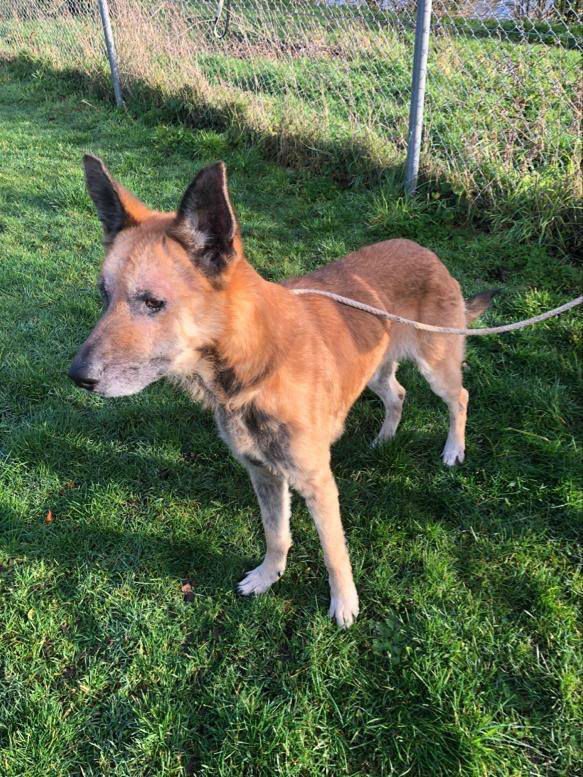 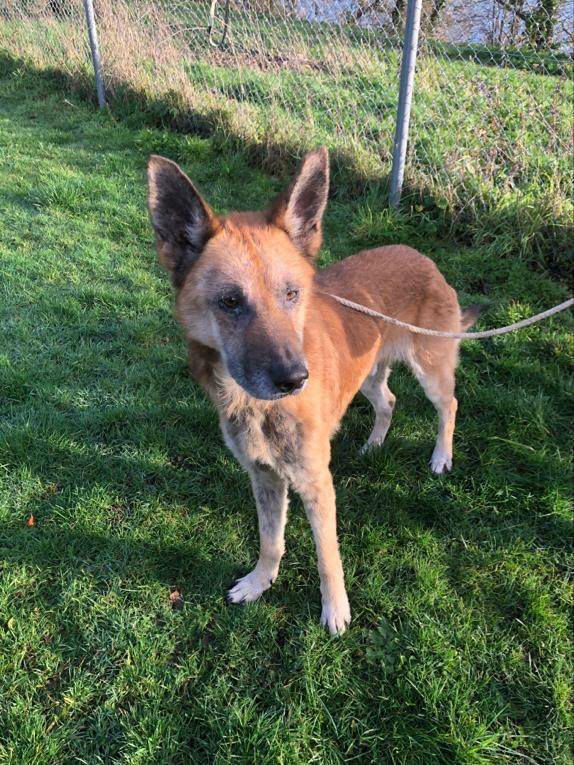 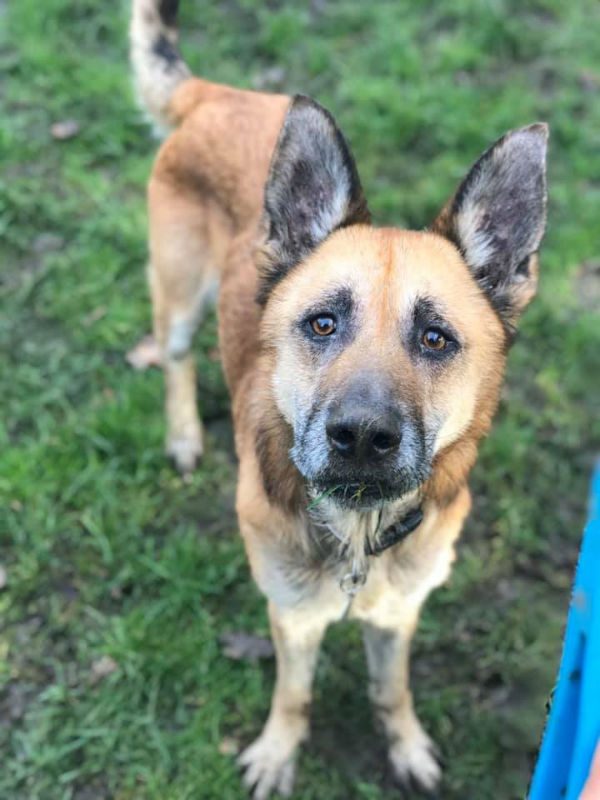 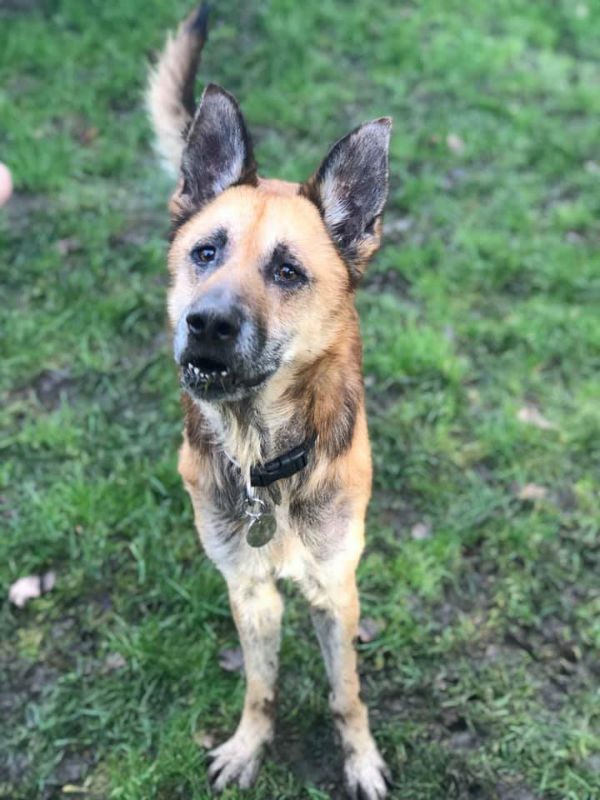 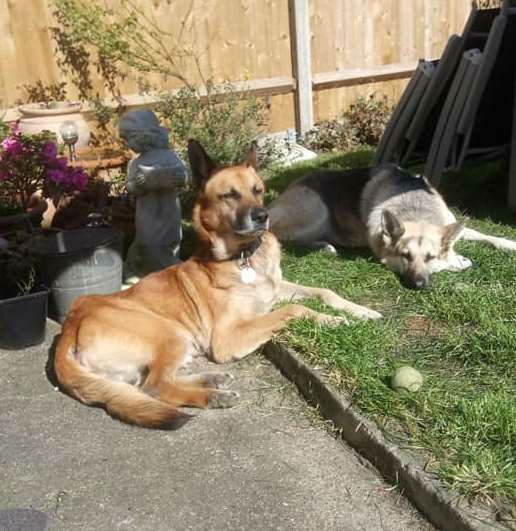 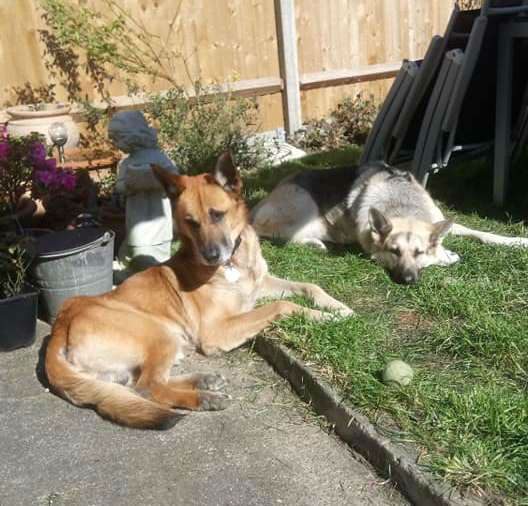 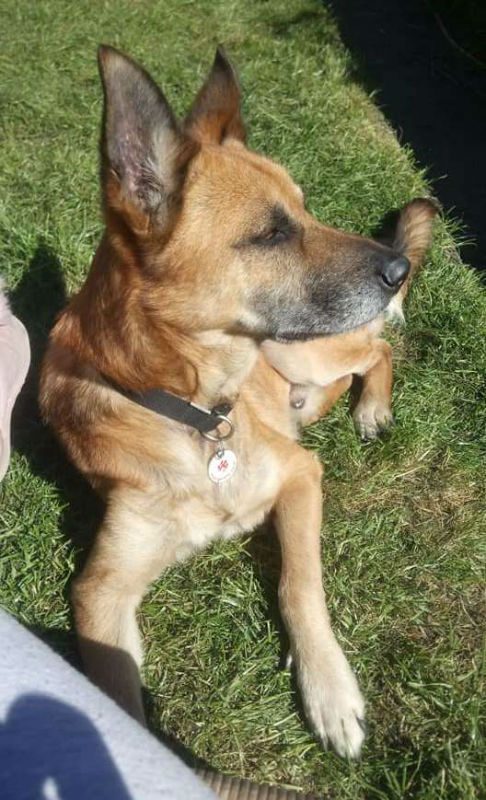 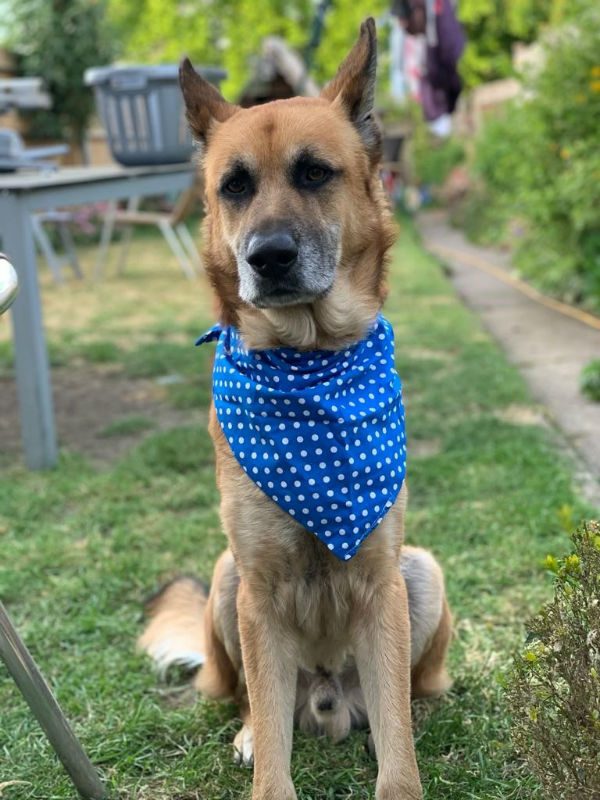 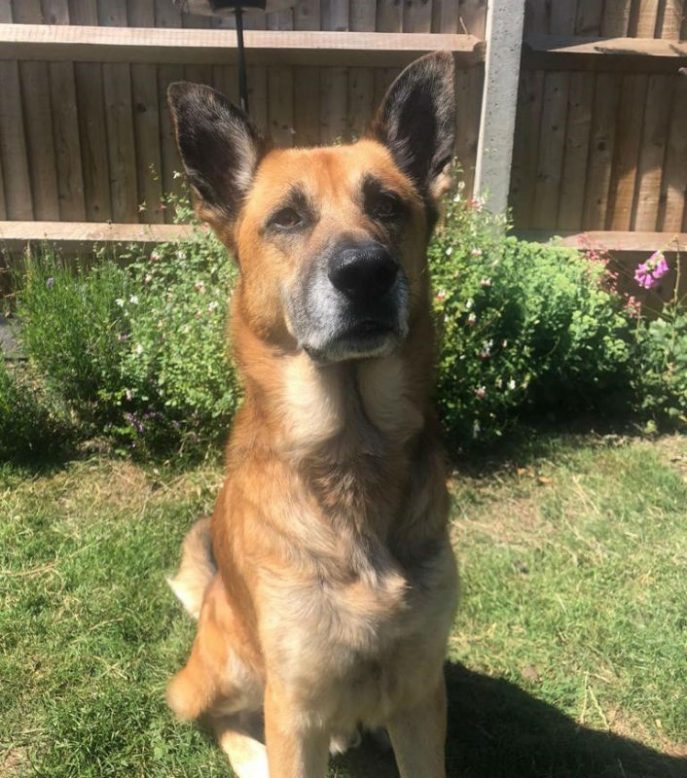 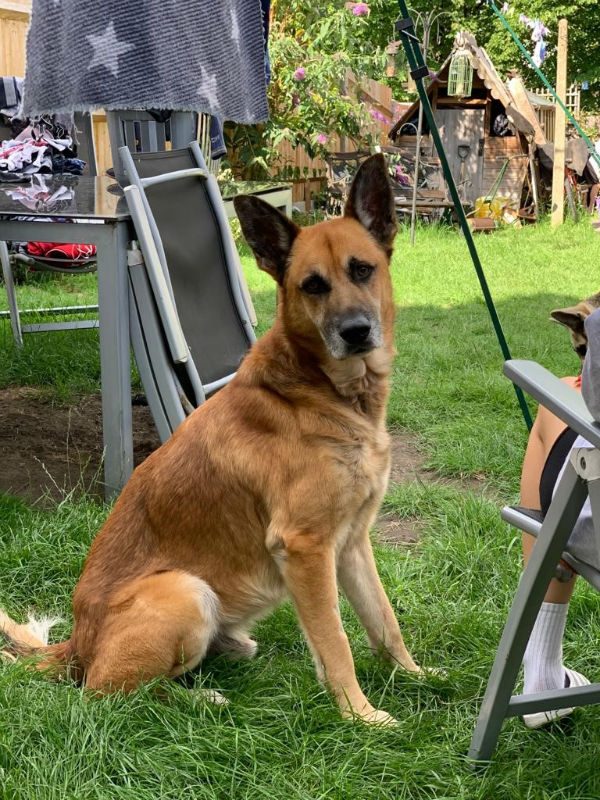 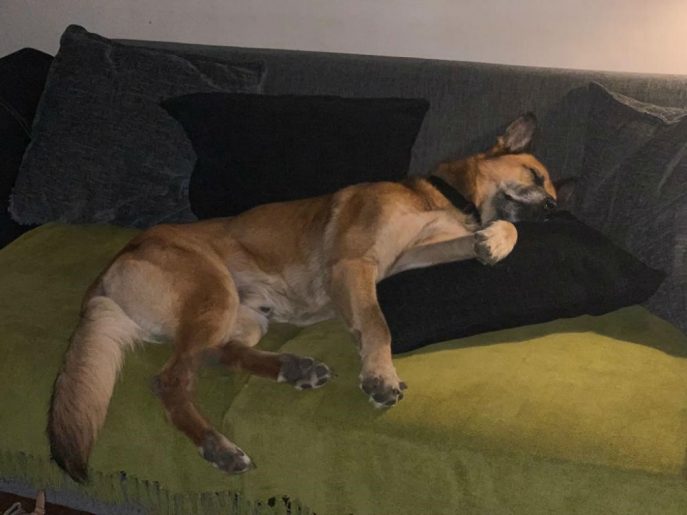 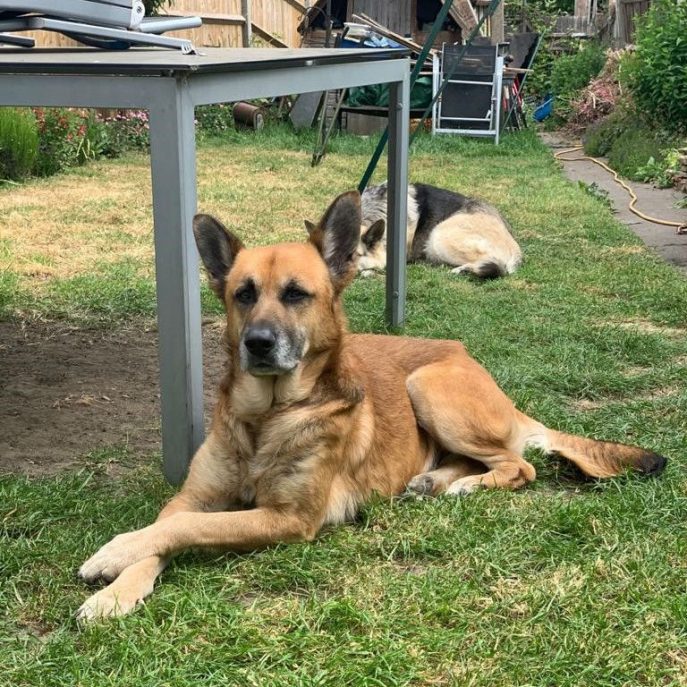 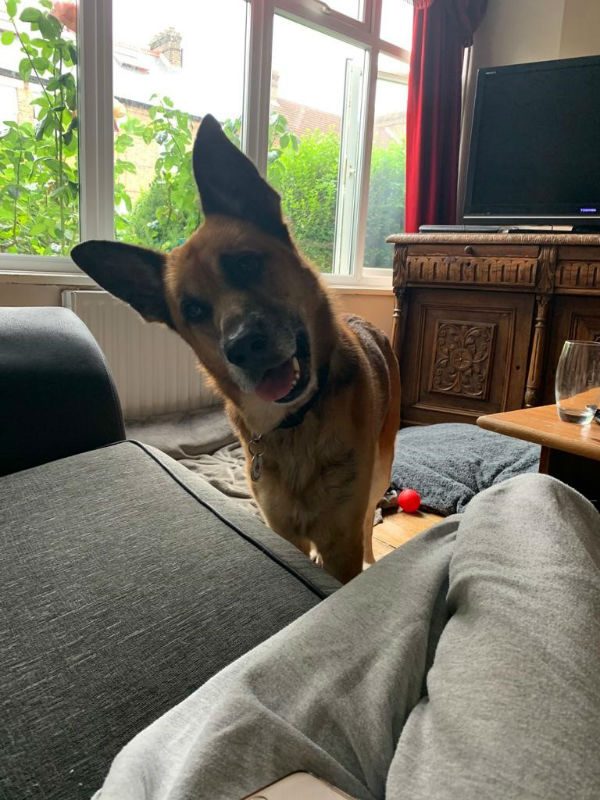 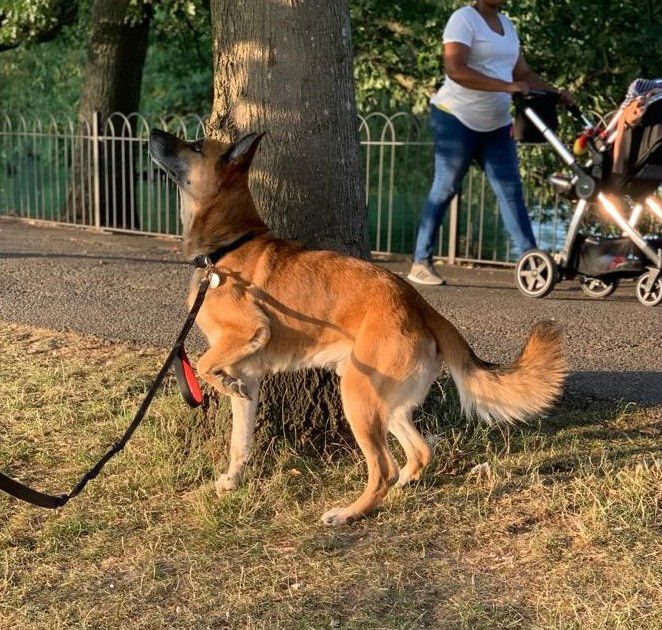 Well what can I say about this lad? We were asked to take this lad in from the pound who was extremely skinny and had been treated for mange. We were told he was about 9 years old. He was microchipped but it had never been registered! After a few weeks in kennels and the mange all clear we managed to find him a foster home with a GSD bitch.

Arthur, as he was named by the kennels, took a while to settle into foster and they wondered if it had been a while since he had been in a home environment if at all. Now he is very comfy and they have a different dog. Arthur now acts like a 3 year old so we wonder if maybe he is a lot younger, especially as his teeth do not look too bad either. So age unknown I’m afraid. He is a sweetheart with most people but older children as we do not know his history and he can take a dislike to the odd person (don’t we all). Living with a GSD bitch at present but can be reactive to other dogs, especially smaller ones.

This lad has been vaccinated and recently neutered. Arthur is quite strong on the lead but has started being walked with a dogmatic which seems to be doing the trick.

Here is what foster mum has to say about him:

“Arthur has made so much progress in his time with us, he really has come a long way.  I am fairly sure he had very limited experience of anything before, was puzzled and worried by so many things in the house. The lights, noises upstairs, the washing machine, even things like a wallpaper brush on the grass or a notebook laying on the coffee table.  On his first day with us he was so stressed he didn’t even sit down for about 8 hours just paced. He now takes everything within the home in his stride.  He will not go upstairs willingly and does not like being lifted up (at all). He does like the sofa and will take himself up on the sofa is there is no one else sitting there.  If someone is already sitting on the sofa, he will wait to invited up by resting his chin on the sofa until you invite him up.

He has been clean in the house and has never chewed or destroyed anything, and has been ok to be left for 2 or 3 hours.  He has never raided the bin, does not counter surf.  Loves travelling in the car and going for a walk.  He is so full of character and he is really funny, makes us laugh a lot.

Initially when we walked him, he was fixated on the ground and would not move from the periphery of the field, park, woods wherever you were, he was very uncomfortable being in an open space.  He is now much more relaxed and despite having to use a dogmatic as he was so extremely strong and pully he is now walking mostly really nicely just on a collar and lead. (Still pulls at the beginning of a walk and if he sees a squirrel!)

He has a strong prey drive and has been known to catch the odd rat in the garden! He would be a definite no to cats, or small furrys as he would chase and his intentions would not be good. He doesn’t like it when dogs chase and will snap.

When we first had him, he would not go anywhere near water at all, would even walk around a puddle! Now loves water and will make a beeline for it, sticks his head in and tries to eat it.

Didn’t have any commands at all, now knows sit, Paw, down (with a treat nearby) and working on touch.

Initially gulped food worrying, now knows that food is regular and plentiful and eats at a normal pace and knows to sit and wait until he is told he can eat.  Has shown no food aggression (although I wouldn’t want to take a pigs ear from him when he has one). When first here he would snap your hand off when taking a treat and now takes treats gently and nicely, although sometimes needs to be reminded to be gentle, particularly if it is something high reward.

His recall is not fab and he hasn’t had a huge amount of time off lead as he is unpredictable with other dogs, so it has not been easy to work on this.  up until recently was mostly fine if he met another dog (as long as they weren’t chasing) especially the smaller dogs, the dogs he took exception too were generally larger dogs and quite often black dogs (not sure what all that was about).  However, since the castration his reactivity has been much worse and he has snapped at any dog that has come too close.  On saying that we did have a couple of more positive (but very short) interactions with a couple of dogs yesterday.

He is very protective of the house, and will bark at anybody walking past, car door, leaf blowing or imagined foe!  Goes ballistic at the door if someone knocks.  You definitely do not need to worry about anyone breaking in with Arthur here.  He finds it challenging letting people into the property, I feel this was definitely not helped by four months of lockdown.  When people come in he will charge and bark and generally look pretty intimidating, however the visitors I have had have been quite brave (even when they didn’t feel it) and he does settle quite quickly and then is fine.   This is something that will need working on.

Is not phased by joggers, cyclists traffic when out walking.  He is a good boy at the vets and the nurses loved him on his visit there.

Weight gain has been a challenge but I started him on a pre and pro biotic a couple of months ago and I think this and being neutered has made a difference and he is now putting a good amount of weight on, and I’m sure this will continue.  His skin has improved hugely but is still recovering and his coat is improving all the time.  He is a truly magnificent looking boy and we get comments about him wherever we go.

He loves a fuss, a cuddle and a brush and understands the word hungry, and on hearing it will give you the most adorable head tilt ever.”

Arthur has been adopted and his forever home.