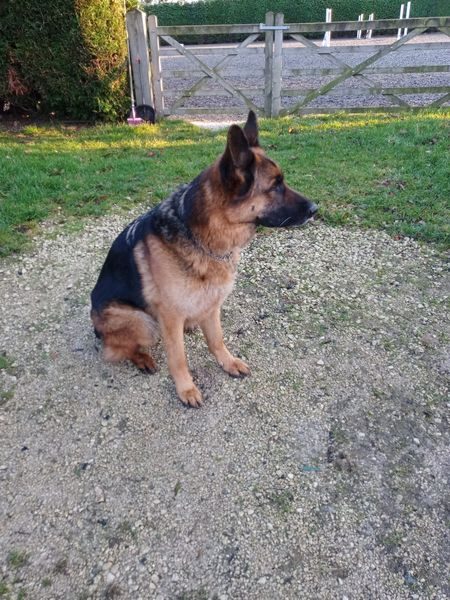 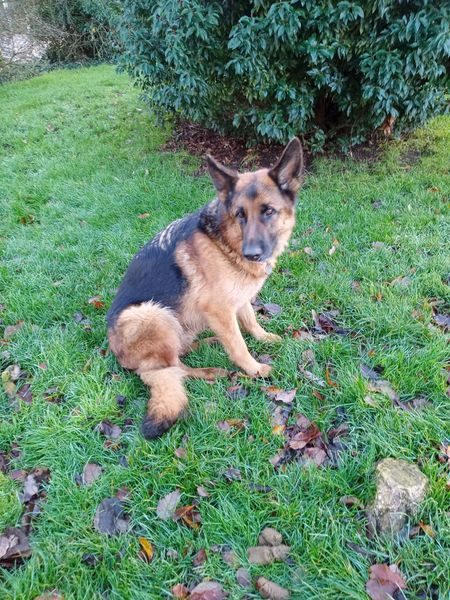 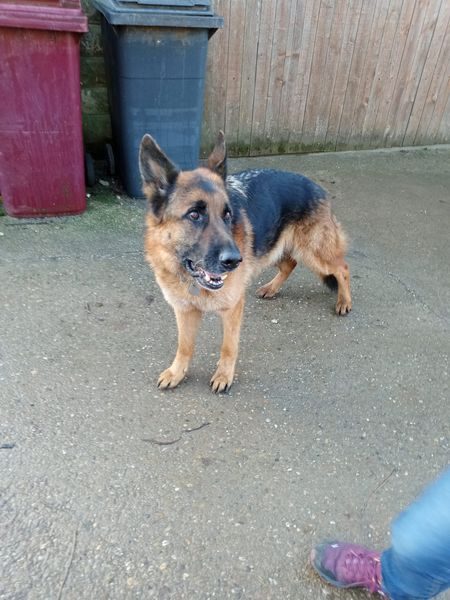 Bailey is available for adoption through GSRE – this is what his current owners say about him.

Bailey is a 5-year-old male, black and tan German Shepherd with short hair. He is neutered, micro-chipped and vaccinated until January 2022. He was wormed and flea treated in November 2021. He has no known food allergies and no disclosed medical issues. Bailey has been in his current home since he was eight weeks old when the owners got him straight from a breeder.

The present owners say it is unknown if Bailey is good with children. He currently lives with one older female GSD and one 18-month-old female GSD but he is selective when meeting other dogs. His owners say that there was an incident with Bailey and a Golden Retriever whereby Bailey ran past this dog and grabbed his ear as he passed, causing the ear to tear. It is not believed by the current owners that this was a sign of aggression but wanted to disclose this incident to GSRE as a bite. Bailey is a no to cats but he is ok with horses (lives on a yard/stables) and has seen sheep, albeit whilst on lead.

Bailey can be quite vocal when visitors arrive at the house, such as deliveries, postman etc. but he is described as only barking with no aggression. He is also vocal at the vets.
Bailey is housetrained and although he has access to the house, at night he sleeps in a stable. He is, at times, left on his own both outside and inside the home without issue. He is not reported to have any toy or food aggression and he travels well in a car. He is good on a lead and knows commands such as sit, down, wait and stay as well as having a recall.

During the time the GSRE assessor spent with Bailey, this is what they said about him.
The assessor found Bailey to be a lovely boy. When he was let out into the stable yard to meet the assessor, Bailey barked and whined initially but there was no aggression shown at all. After Bailey had a bum scratch by the assessor, he was happy to wonder off.

He is described as being in very good condition and is very well cared for. He is fine with staff and visitors coming and going from the yard. He is good on lead and is happy to be handled and examined and was not phased by noises etc.

The assessor has queried whether Baileys behaviour may be a case of separation anxiety as he does appear very attached to his present owner.

Bailey is used to being out and about, either walking or helping on the yard so he would benefit from having an active purposeful lifestyle and spending time outdoors.
The assessor found Bailey to be a gorgeous and very friendly boy who is well trained.