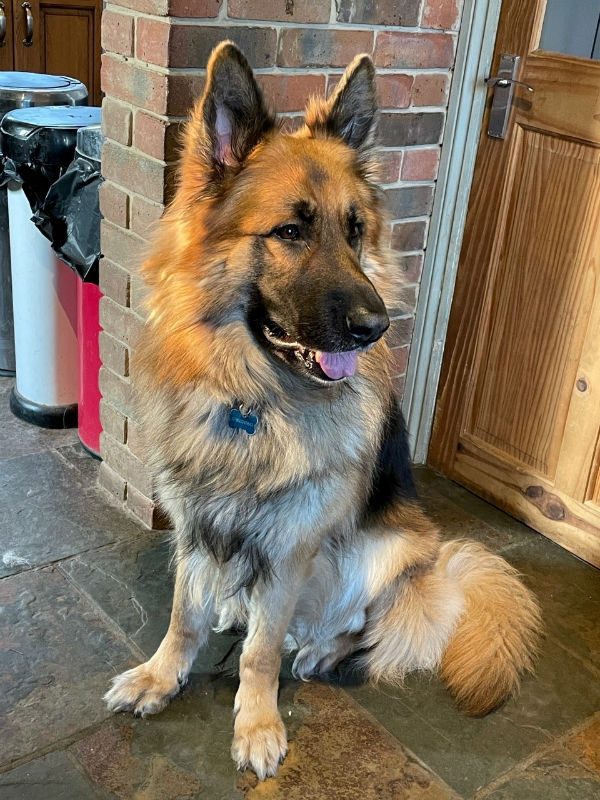 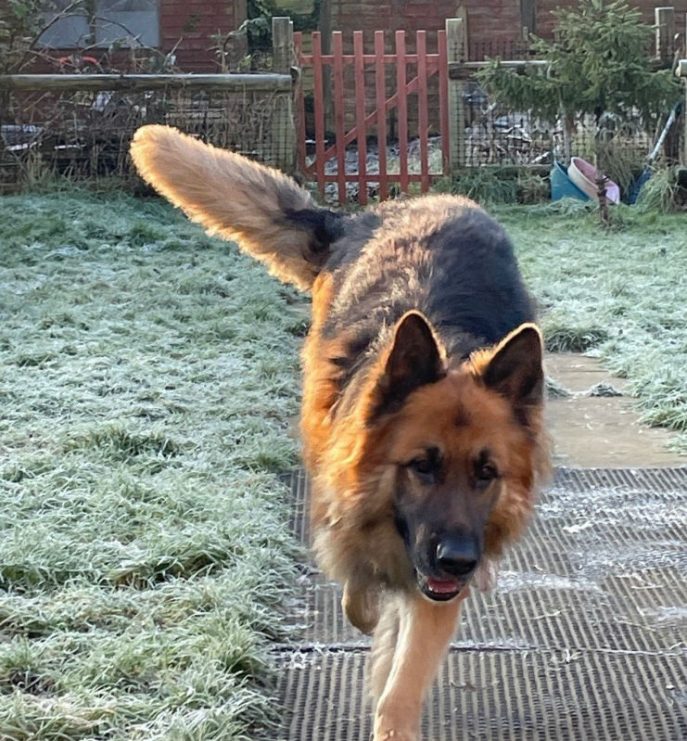 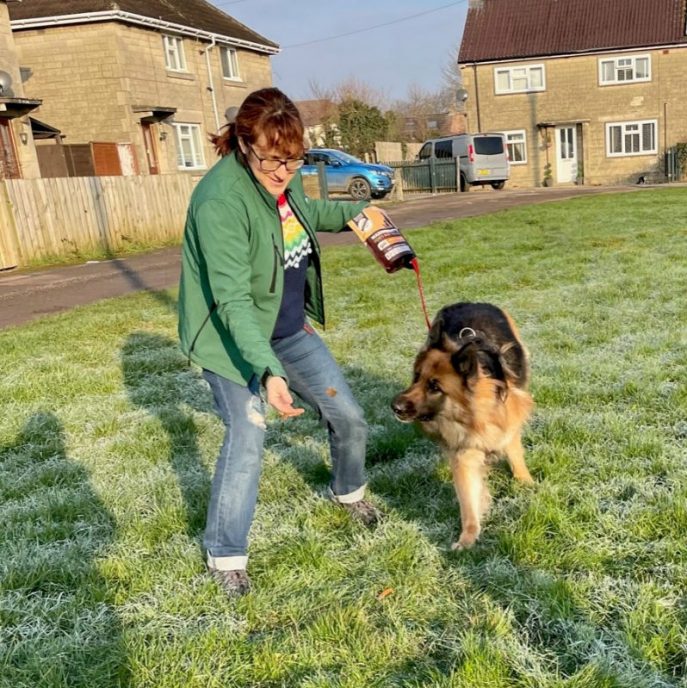 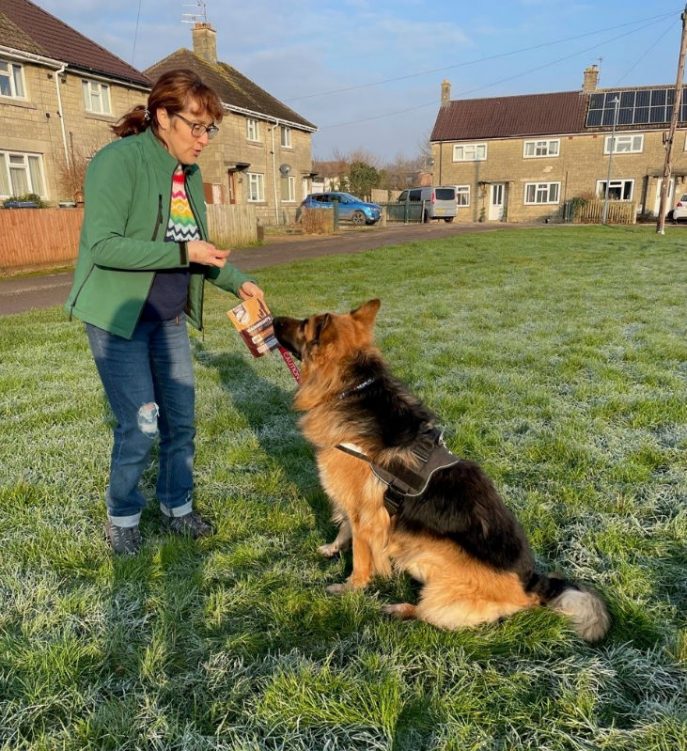 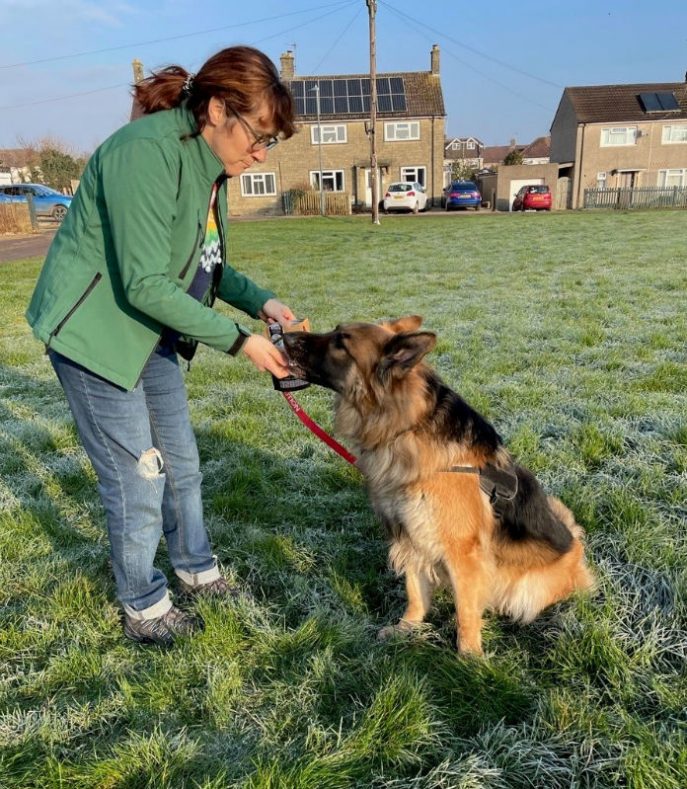 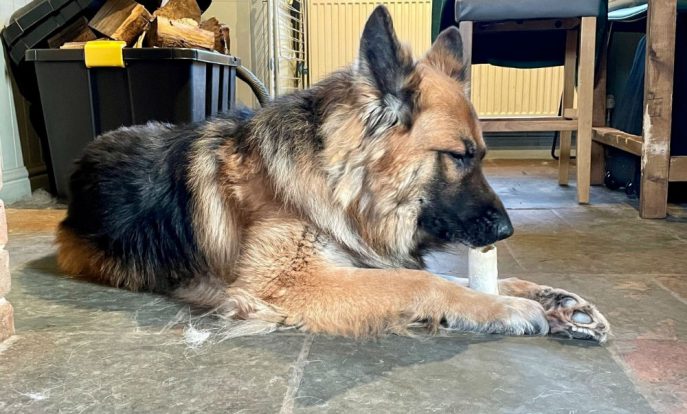 May I introduce Diggs who is nearly 4 years old. He is entire but his vaccinations are up to date and he is microchipped. This is what our volunteer has to say about him:

“Upon arriving at the home, there was a cacophony of barking from the other three Dogs living there, but not from Diggs. It was from 10 year old white GSD Storm who is clearly the ‘man” of the house. The other two joining in were a male and female Daschund who both had little Dog Syndrome. Diggs actually look downtrodden and didn’t enjoy the noise. When the two small dogs were taken upstairs and Storm was ushered out for a walk, it took him 3 to 4 minutes to stop barking. However, I then suggested closing the kitchen door directly behind the stair gate and he shut up calmed down pretty much straight away.

Once the door was closed he was happy to sit and wait whilst I spoke to his owner for a reasonable amount of time before we went out. I watched him the garden first and he came to his name and didn’t seem too bothered by another dog barking a few gardens along. I was advised to not take him out when there were other dogs around so we had to wait. Once out, he pulls like the proverbial anything and has no real manners on lead. This is in line with the owners declining bone health as she cannot walk him at the pace he likes. Diggs knows sit, stay, down but only when he is not excited! Walking with him was a mission but as long as I let him sniff lots and not put pressure on him to ‘keep walking’ so we didn’t get far.

When I first saw Diggs by himself, he jumped up several times. I, however turned around on him with still arms so after three attempts he stopped. Once settled, he was an immediate softie with me. He let me stroke him once he had just a couple off sniffs. He would lean against me and ask for affection, ask for his chest to be scratched and was generally very happy to be near me.”

Diggs has only met teenagers so would not be rehomed with young children. He obviously needs proper socialisation work with other dogs when out, and probably could live with a calmer, older female, but may well prefer a home where he is the only dog after his current situation. A no to cats.

Diggs will need an experienced GSD home that can give him the boundaries and training he desperately needs and can work with the doggie etiquette he needs. A lovely young man in the right hands.

Diggs has been rehomed by his owner.

Location:
Wiltshire- IN HOME
Sex:
Male
Age:
DOB 9.2.18
Neutered:
No
Good with children:
Yes - Older Only
Good with other dogs:
Careful introduction
Good with cats:
No