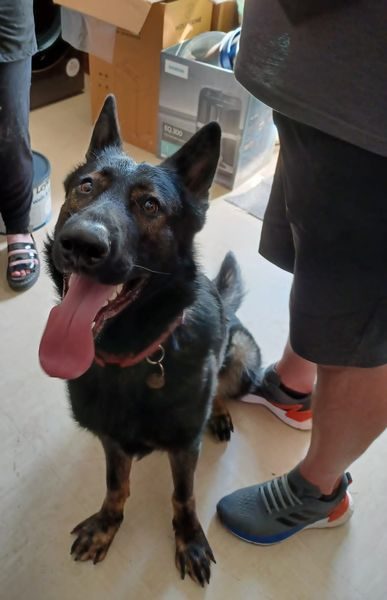 Puppy is available for adoption through GSRE – This is what his current owners say about him.

Puppy is an 18-month-old, male, short haired, dark sable German Shepherd. He is not currently neutered but is microchipped. His vaccinations have expired but he is currently worm and flea treated. He is not believed to have any food allergies. He is currently fed raw and dry food which is left down for him to graze. He does not have any disclosed medical issues. He has been in his current home since being bought from a ‘breeder’ at 7 weeks old. He was fine when visiting the vets when younger but it is not known how he would react now.

Puppy is being rehomed due to his owner’s health and Puppy now being too big for them to look after properly.

Puppy is good with children 3 years and over. He is good with other dogs after careful introductions and has lived with another dog previously without any known issues. His reaction to cats and livestock is unknown.

Puppy has never bitten anyone or shown aggression but he will bark at strangers when people come to the home. He can be left alone for up to 2 hours and does not display any destructive behaviours, however, the owners believe that he may be stressed when they are not present. He lives indoors and is toilet trained. He does not have any possessive tendencies over food or toys and is not described as barking excessively.
Puppy will pull to start with when walking on a lead and needs some training in that area. He knows sit, down and paw but it is not known if he has a recall (which in itself probably means he doesn’t).

During the time the GSRE assessor spent with Puppy, this is what they said about him.
On first meeting the assessor, Puppy barked at them. They went for a walk and after 5 minutes he had a good sniff and after 10 minutes the assessor was able to take the lead and walk puppy themselves – some lead training required.
After returning from the walk, Puppy had no issue with the assessor being in the house and was happy to be fussed and gave out lots of kisses. The assessor played with Puppy’s toys with him, showing no sign of aggression when they were taken away – same with food.

The assessor found Puppy to be a young, energetic and occasionally boisterous dog who would make a lovely dog for the right home that can give him the guidance and training he needs.