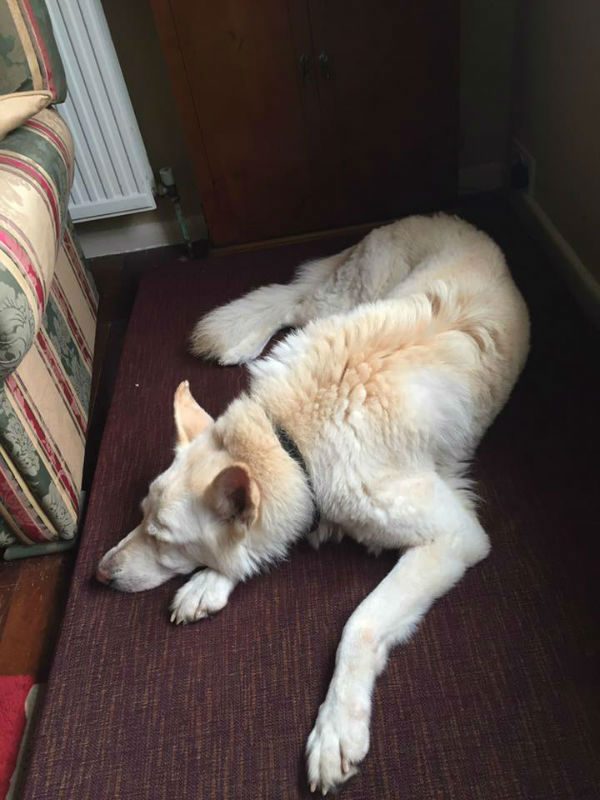 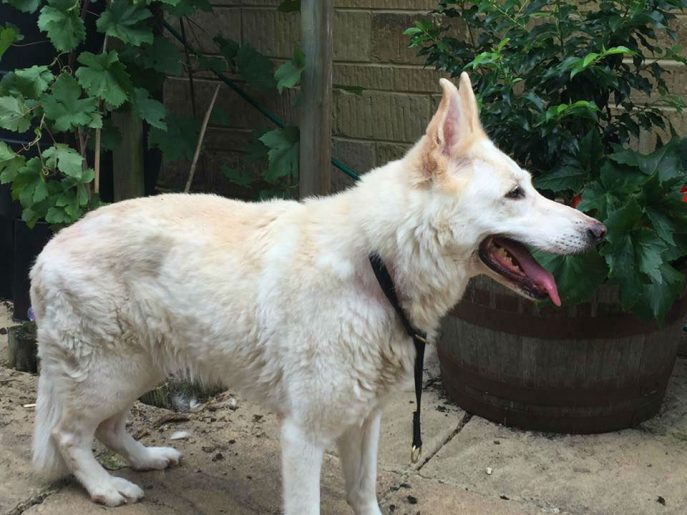 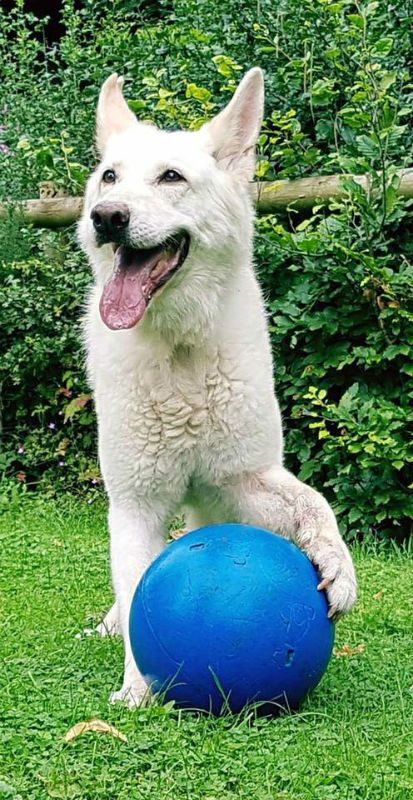 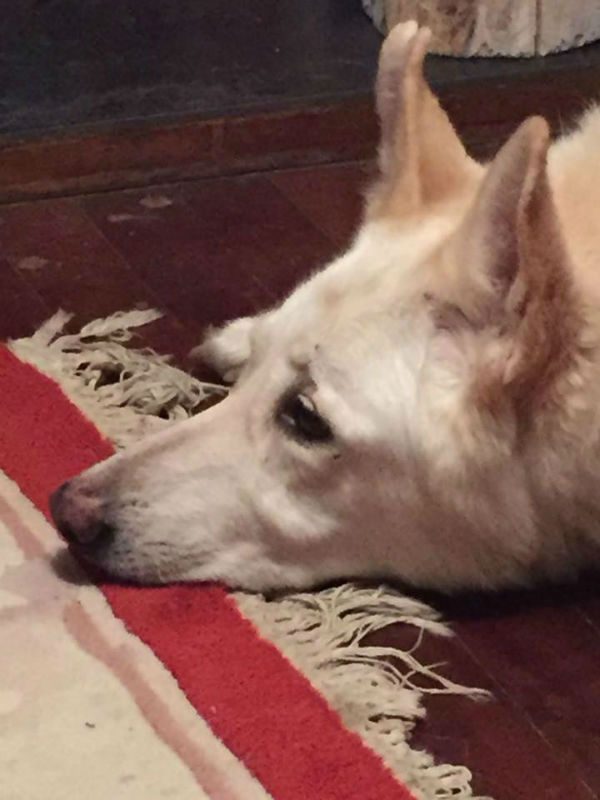 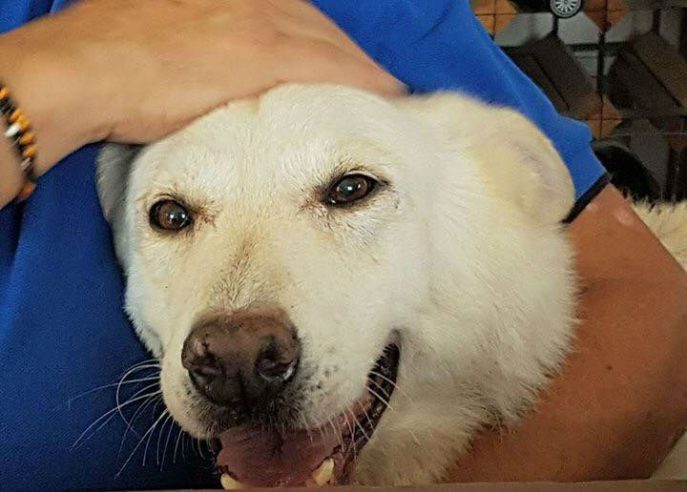 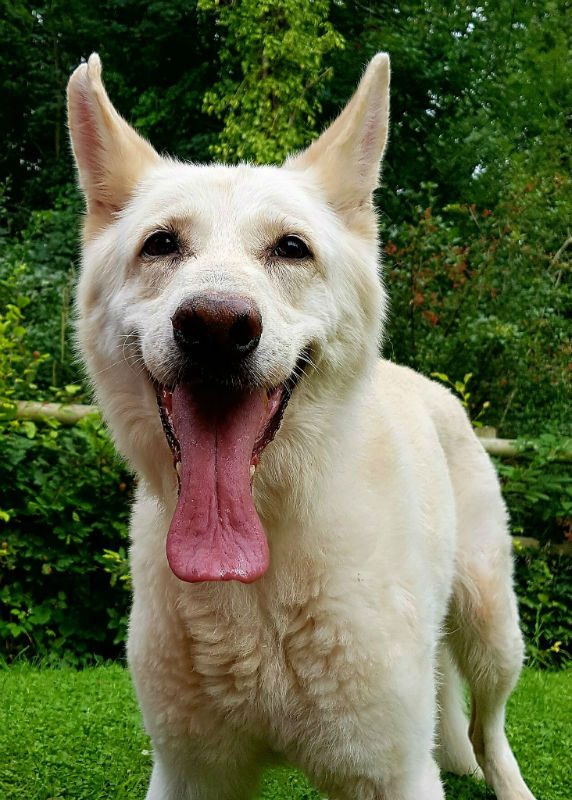 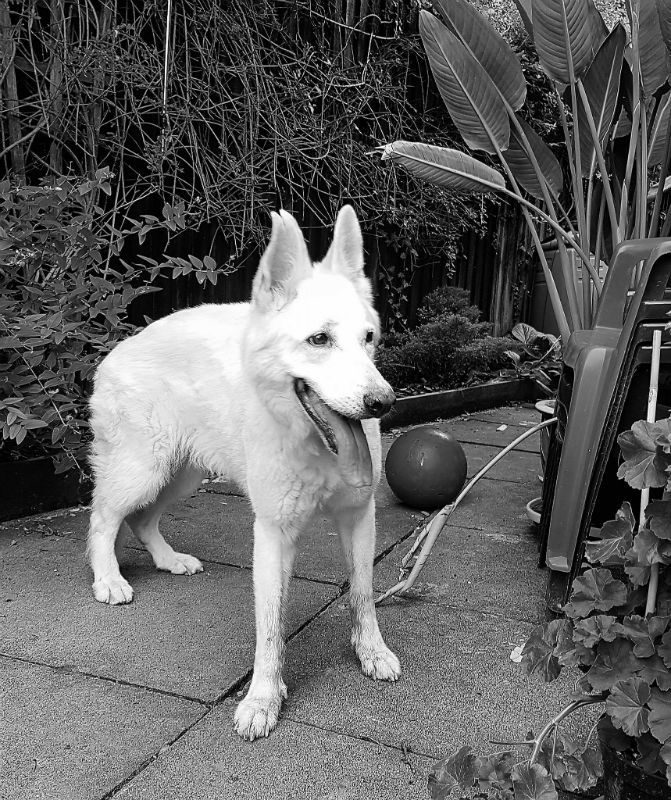 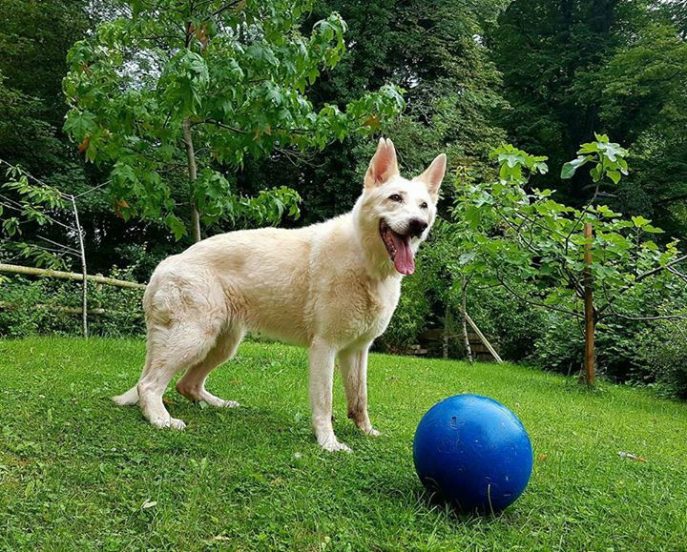 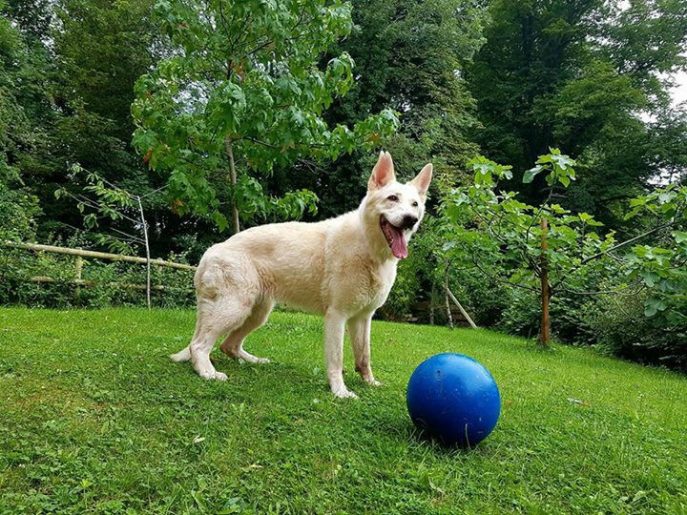 May I introduce Summer who is 11 years old, spayed and microchipped and vaccinations have been restarted. We were asked to take Summer in after she had been handed into another rescue.

This is what foster mum has to say about her:

“When Summer first arrived in foster she was a ball of very nervous fluff, she would hide away upstairs and not want to come down.  Her coat was in poor condition and she was underweight.

During her time in foster so far Summer has realised that the world isn’t such a scary place.  However, she only goes out on walks 2/3 times per week at present to fairly quiet locations to build up her confidence.  Meantime, she is content to act like a puppy and play endlessly in the garden.  She also has been occupying her time learning new commands.  So far she has learnt:

Sit, Down, Tummy, Paw, Other paw, Take it, Leave, Fetch and Wait.

She will wait on queue before eating her breakfast or dinner.  She will sit patiently (but wriggling in excitement) for her harness and lead to be put on.  She will not however wait to jump into the car as she thinks you are going to leave her…But once in the car she settles wonderfully and just sits watching the world go by.

In the house Summer LOVES treats, which she takes so gently.  She also really enjoys as part of her daily routine a stuffed Kong, wobble Kong and snuffle mat.  However, when out of the house treats hold no appeal to her.  Then she is far more toy orientated.  In the house she loves her soft toys, outside she loves nothing more than playing football or boomer ball, or a good game of tug!  When on a walk she finds great comfort in carrying a stick or a raggy toy.  When out and about she can appear at times unresponsive, this is usually a sign that she’s just a bit overwhelmed and a quieter environment is required.  She has been let off on a secure field and whilst she did trot off quite far away to sniff, she will come back and check in.  I wouldn’t advise to try this in a non-secure environment though, as I think the distractions would be too great a temptation at present.

Summer loves all people although she can be unsure of tall burly men with deep voices, she will then hide between someone’s legs until she feel more confident.  Our 5 year old nephew has been around Summer and she was excited but respectful of him.  I would say that she is a bit old to live with young children now but would be okay somewhere that grandkids visit as long as they were GSD savvy.

She has been totally chilled with thunder and lightning and I am sure will be the same with fireworks.  She however is petrified if a door slams or if you move a brush/broom too quickly.  However, we have been working on de-sensitising her to this along with the hoover.

We have worked up to leaving Summer for up to 3-4 hours in the house un crated with the radio on.  Any new home will again need to work up to this themselves.

Summer suffers from frustration if she sees another dog and isn’t allowed to say hello.  She will bark and whinge.  However, she isn’t displaying the right signals at times, so for her to say hello to some dogs would get her in a lot of trouble if allowed.  She has met on lead briefly with some calm dogs though and has been ok.  She is also a big no to cats and will chase them.  On the lead Summer will pull a lot.  This is being worked on, but a dogmatic will also help with the problem.

Summer is a beautiful loving dog that loves to please you and gives really great cuddles.  She loves tummy rubs and can be touched all over including paws (although they are ticklish)….

Ideally Summer would love a place with a nice garden to play in.  Somewhere that her humans are home a lot of the time so that they can play with her and in return when you do sit down she can keep your feet warm for you.  Is this you?  Don’t be put off with her age this girlie has a lot of energy and love to give!”

Summer has found her home.

Summer had a wonderful retirement but has now passed over Rainbow Bridge.