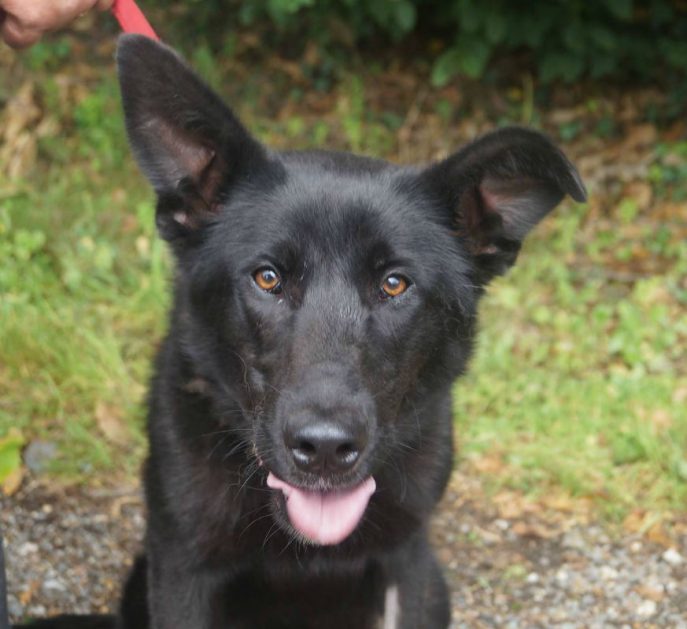 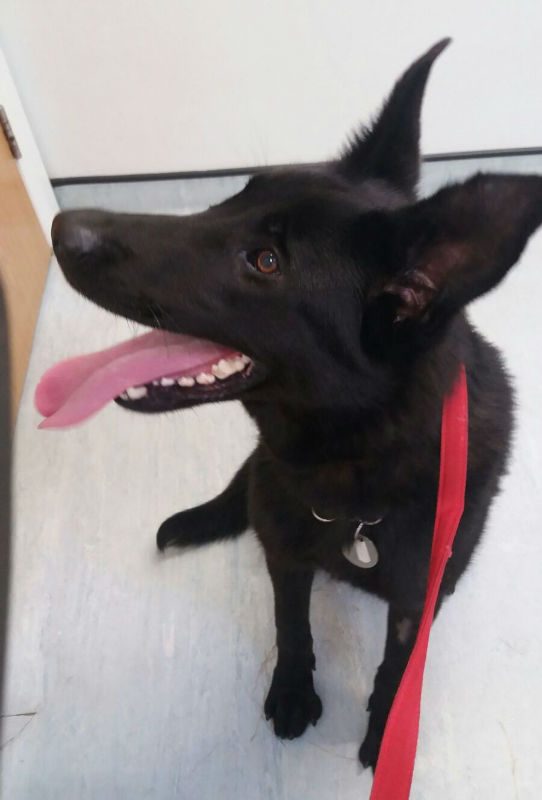 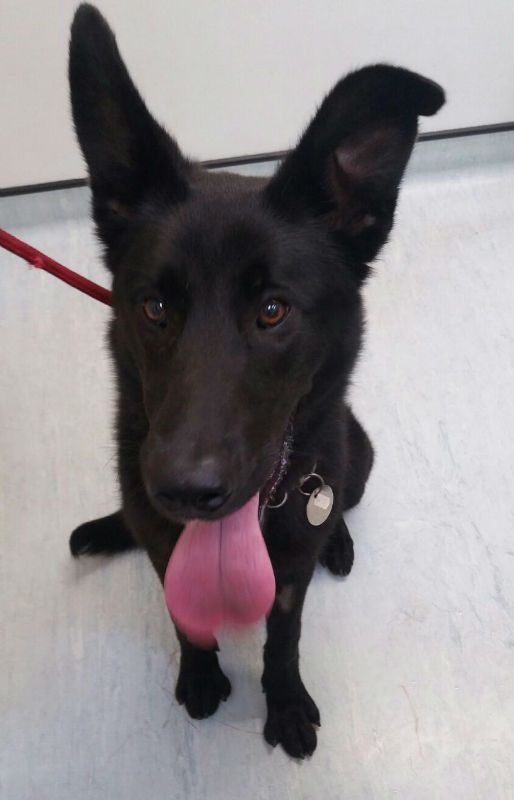 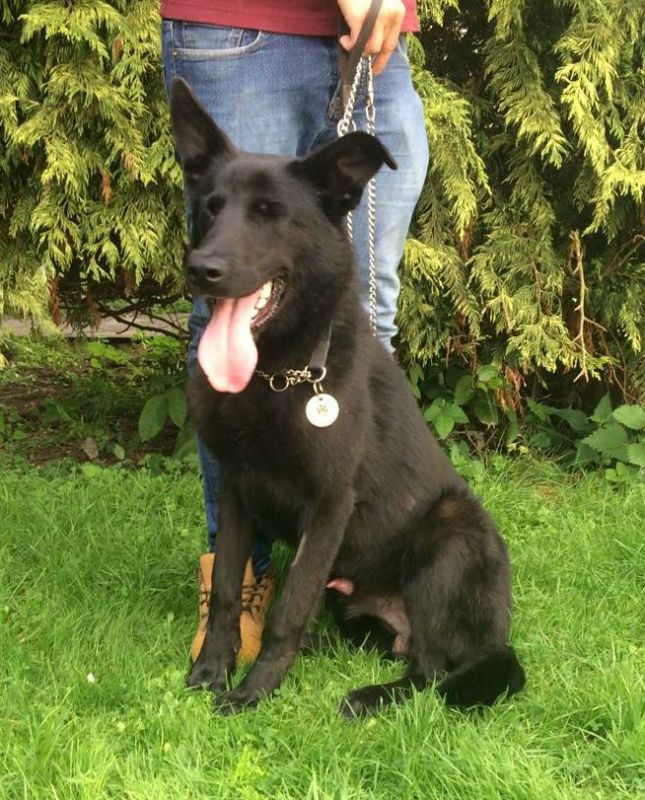 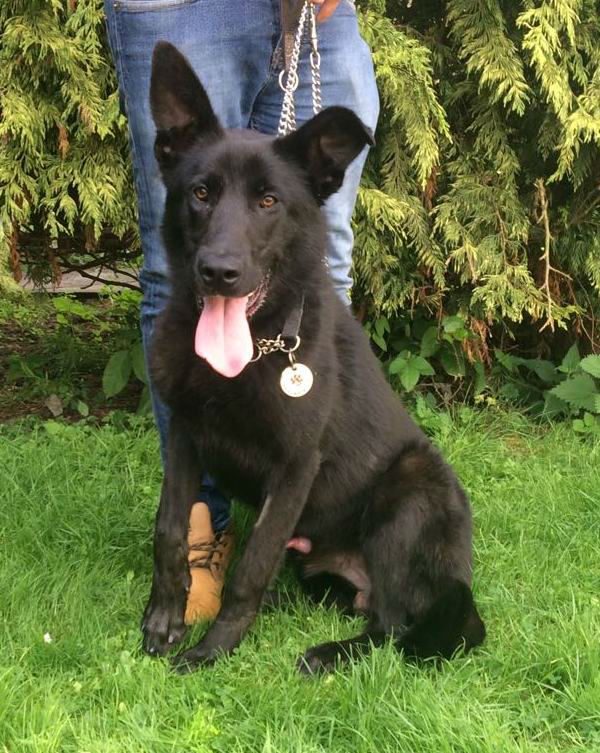 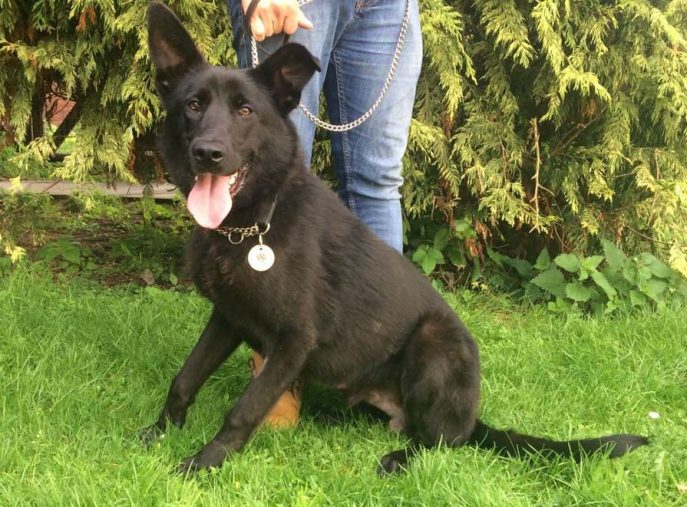 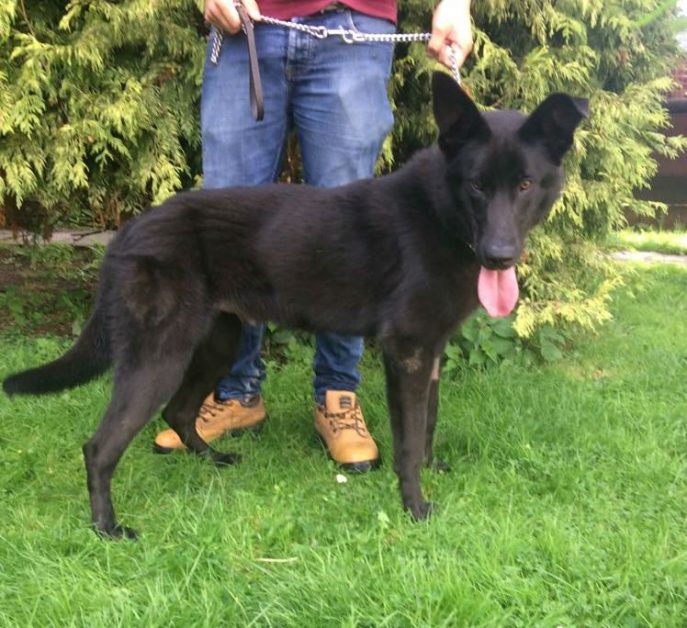 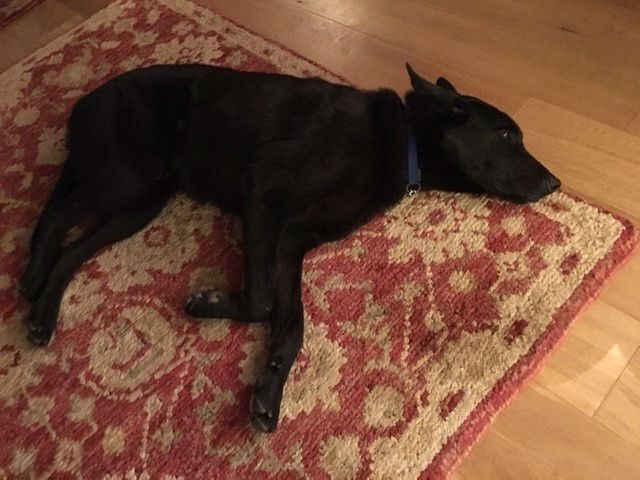 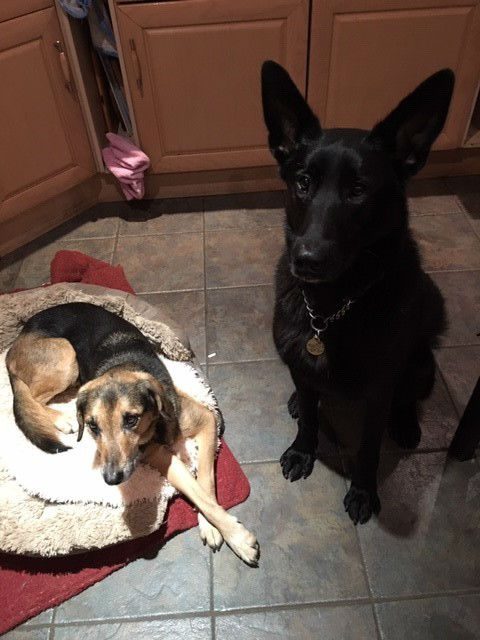 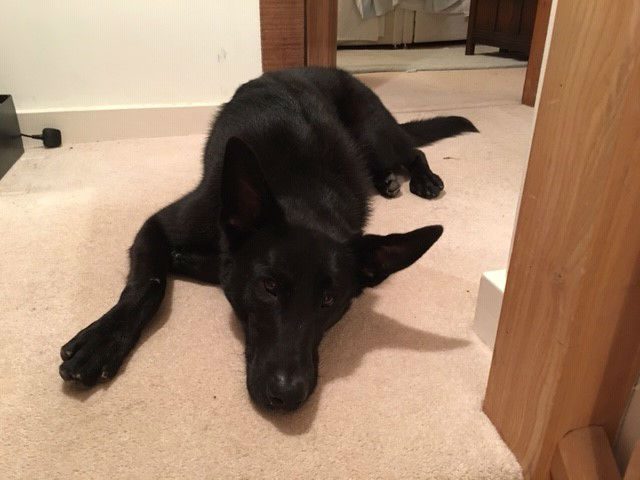 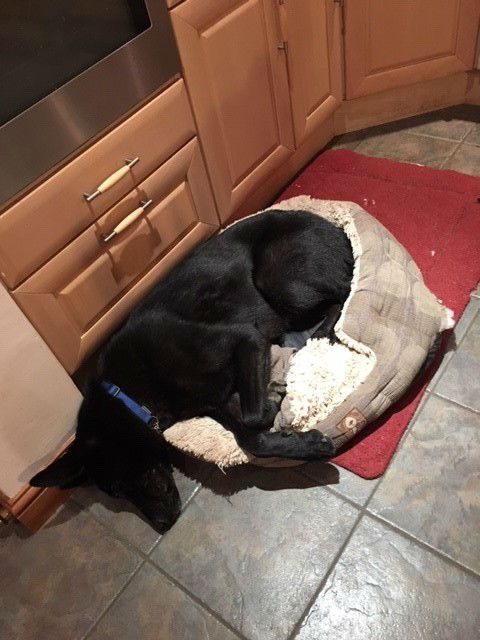 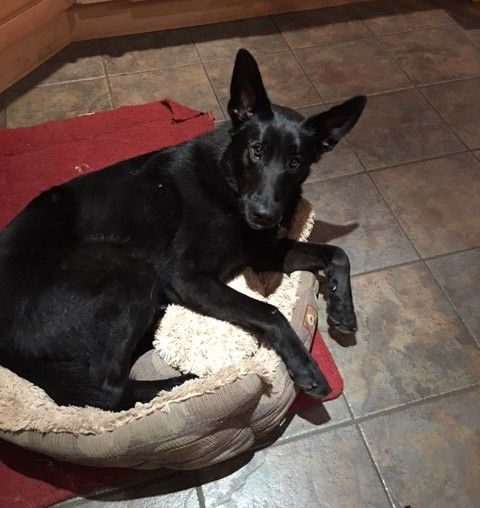 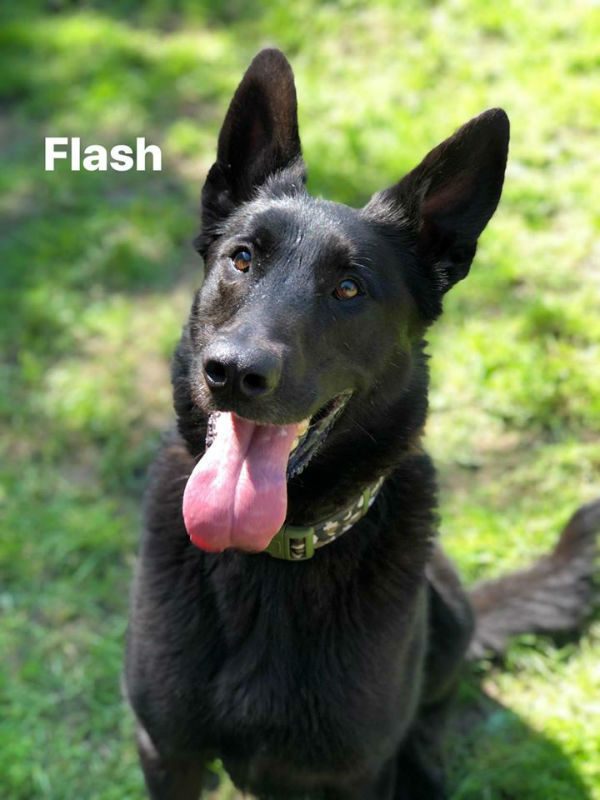 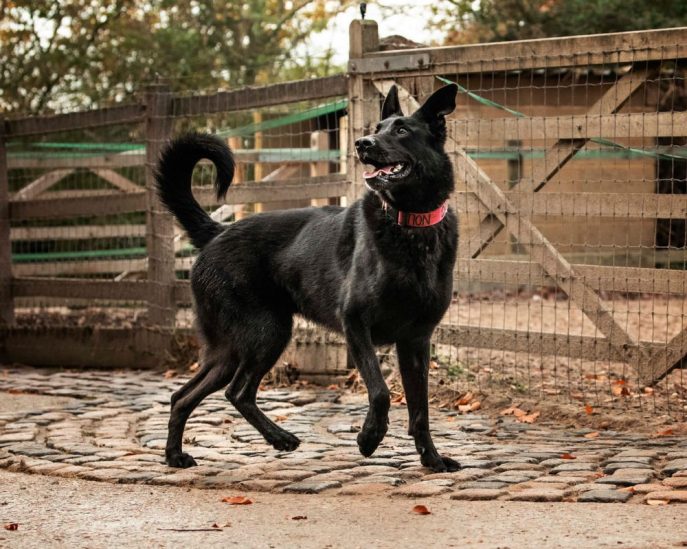 Flash is now 4 years of age. Not full GSD we believe. Flash was taken in from the pound so we had no history on him. He is vaccinated, microchipped and neutered.

Flash is a very lively, very excitable young man, who does not seem to have been given any boundaries. Loves playing with other dogs but plays like a rugby tackler which can be intimidating. Too boisterous to live with young children but loves people and being cuddled in between rugby tackle games with you if no dogs to play with. This can come across as aggression if you are not expecting it, so he needs a strong, experienced home who can work with this.

Flash will need an active home that can give him plenty of exercise and mental stimulation. He will need to be taught many things, walking nicely on the lead, boundaries in the home, but could be a fantastic project for someone who wanted to do something like agility.

Flash went for a short foster break and this is what his foster dad had to say about him:

“Flash has real personality and is full of mischief but it is just to demand attention.  He is very bright and so easily bored and will grab anything handy as a toy but if you say “NO” firmly he will immediately drop the item.  He “Sits” when told and will give a paw.  He loves people and is very affectionate.  He will come when called and put up with as much fuss as you are willing to give him.  Really loved our dog but doesn’t know when the poor old boy has had enough so we had to separate them to give our one some peace.  I wouldn’t really say he is particularly boisterous for such a youngster, as I write this he has stretched out on the dog bed plotting his next raid on the bin when he thinks we are not looking.

He is house trained and not the slightest sign of aggression.  Probably because he was a stray he seems to be permanently hungry and gulps his food down in seconds.  He pulls on the lead but he just needs training and stimulation to make a great dog.  Not seen him with children but I have seen nothing to make me think he would not make a great family pet.  In fact he would probably do better with a young and energetic family who could keep him active and occupied.”

And on his second foster break with another home:

“Flash lodged with us for eight weeks. He lived with an elderly female hound and a middle aged male German Shepherd. From the outset it was clear that Flash had not had many experiences. He often behaved like an unruly, leggy puppy. In his time with us he learnt to sit and to lie down (High fives strictly banned as he uses them as an excuse to jump up and mouth).

He attended a weekly dog club and was well behaved with the other dogs. The other dog owners commented on the progress he was making. He has learnt to sit and wait for permission to eat his food. He is very food focused and will grab and run if given the chance. Flash’s recall is good as long as there are no dogs in his line of vision. Even this is improving as he matures. He needs the opportunity to have a good long run each day. If he has this, he is calm and content in the evening. He has been going for 40 minute jogging sessions and been very good. He wears a headcom and walks well when wearing it.

Flash is very friendly with humans and dogs alike. He has met children on walks and seems indifferent. However, with such a lack of experience best for him not to be in a home with children. He is a big super-handsome lad and very, very affectionate. He loves being groomed with a hand mitten. A mobile dog groomer came to the house and bathed and groomed him in her van. Understandably, he was a little nervous but there wasn’t a hint of aggression.

Flash needs people who are very active and are around a lot of the time. He is intelligent and needs mental stimulation as well as a lot of exercise. Our 91 year old grandmother loves him and said if she were younger she’d adopt him! With firm, consistent treatment he will steadily grow up and be a magnificent, loyal friend.”

Flash was adopted but sadly over bonded with the man of the house and started becoming over protective especially when out on the lead. This lad needs a very experienced home that can ensure he does not feel the need to protect. His ideal home would be somewhere rural with space to run where he did not need to interact with too many people he did not know. He would need to be muzzled when out in public and kept on lead.

We know the right home for Flash is out there! Are you Flash energetic and brave enough?